Word of the week: Yeet

At the American Dialect Society’s annual Word of the Year vote, held Friday, January 4 in New York City, the overall winner was tender-age shelter. (Here’s my column about tender-age shelter for the Visual Thesaurus; subscription required for full access.) The runner-up word, yeet, was less topical and less transparent, especially if you’re older than, say, 19. I keep a running list of potential words of the year, and yeet — which was voted the Slang/Informal Word of the Year for 2018, and which won the first-round vote for overall WOTY — had completely escaped my attention. So I looked into it. 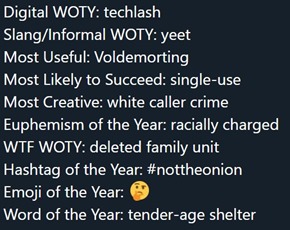 Via @frozenpandaman. According to the American Dialect Society’s live Twitter feed, “voting occurred to many shouts of ‘yeet!’ in the room.”

On the ballot, yeet was defined as an “indication of surprise or excitement,” but in practice it’s a lot more flexible. As the authors of a September 2018 Daily Dot article put it, yeet “can take on any number of uses as a noun or a verb, typically as a way to express a sudden or forceful motion, such as throwing an object long distance. Likewise, the term can also apparently be used to describe someone who has experienced dramatic defeat in situations such as playing a sport or video game.” (A 2015 article in Bustle linked it to basketball, specifically “when someone has shot a three-pointer that they are sure will go in the hoop.”) Yeet has moved Urban Dictionary definers to poetic raptures: “‘Yeet’ can be used gently, like the faint brush of a butterfly’s wings as it crosses one’s lips, as one completes a difficult task (i.e. boss in a difficult game, tough question on a math test.)”

In other words, it’s a sort of kadigan – a placeholder word – akin to jawn, the Philadelphia-area slang that, according to Dictionary.com, can mean “anything … literally anything.” But while jawn has been traced to the 19th-century underworld word joint, yeet has no clearly identifiable source. (At least, I haven’t been able to identify one.) It may be onomatopoetic, like eek! or yikes! Maybe it resulted from a mis-hearing from some completely different word.

Wherever it originated, yeet owes its spread to the Internet.

I mostly know it from this Vine: https://t.co/FeTXGdSy1o

That video was posted in April 2016 and has received nearly 3.4 million views. (The Vine short-video service launched in January 2013 and was shut down by parent company Twitter in October 2016. Twitter maintains an online archive of the content.) But an earlier  “yeet” Vine, posted in March 2014 by “Lil Meatball,” was viewed in more than 40 million loops, and has received more than 3.7 million views since being uploaded to YouTube in April 2014.

In the first Vine, yeet is an exclamation that follows a specific type of action: that of throwing an object. In the second Vine, yeet is the name of a dance that Know Your Meme describes as “dipping one's shoulder in rhythmic steps with both hands out in front and knees bent as if the performer is riding a bicycle.” The earliest yeet dance video was posted on February 12, 2014; a hip-hop song titled “Yeet” was released 12 days later. Sample lyrics:

I hope that clears things up.

Do you want to use yeet in a sentence? Check this out. 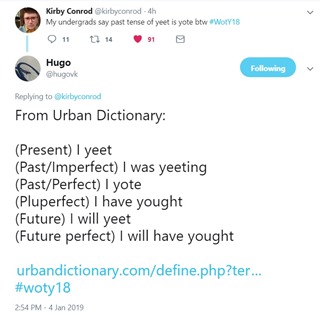