Credit where it’s due: the wimp label puts Trump in distinguished company. An October 1987 Newsweek cover story forever associated then-candidate George H.W. Bush with “wimp factor.” (Wimp was added by the story’s editor over the objections of the reporter.) The not-very-subtle subtext was that as vice president, Bush had been a meek, subservient shadow of the supposedly macho Ronald Reagan. Bush fought back, and eventually the “wimp” label fell on his Democratic opponent, Michael Dukakis, mostly because he was several inches shorter than Bush. 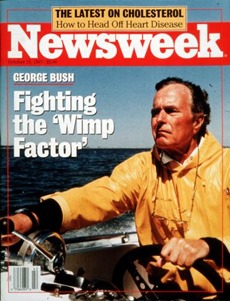 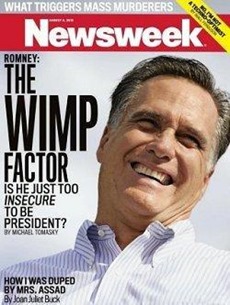 Whence this wimp? Frustratingly, its origins are not clear cut. Today, it’s used in the U.S. exclusively in reference to men, but in the UK, beginning in the 1920s, it was a slang word for “woman” or “girl.” (According to a 1940 source cited by the OED, Public School Slang, said the word was “a corruption of women.”) It emerged briefly around the same time on this side of the Atlantic, where it signified “a feeble or ineffectual person; one who is spineless or ‘wet’” (OED again; “wet” as in feeble, soppy, ineffectual, “a drip.”)

But there’s a mystery here: after a single 1920 citation (in George Ade’s Hand-made Fables), wimp disappeared for some four decades. It resurfaced in a 1964 issue of American Speech, the journal of the American Dialect Society, with this notation: “a baff is ‘a person who does silly things deliberately’; but wimp is still mysterious and undefined in my notes.” By 1966, Current Slang, published at the University of South Dakota, had come up with a definition – “a backward person” – that didn’t quite match the inflection of the example sentence: “He’s a real wimp on a date.”

The OED speculates that wimp might have come from whimper: an imitative term for a feeble, broken cry. In some English dialects, a wimp means the cry of a dog. (This would be poetic justice for Trump, who does not own a dog but loves to compare people, things, and actions to dogs.)

The adjective wimpy first appeared in print in 1967, according to the OED, which says it’s “orig. U.S.” 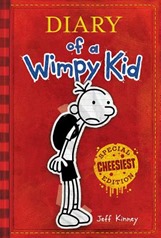 Diary of a Wimpy Kid (2007), written and illustrated by Jeff Kinney

But capital-W Wimpy had been around much longer: it’s the surname of a character introduced in 1934 by E.C. Segar in his “Popeye” comic strip. J. Wellington Wimpy – a gluttonous, parsimonious, cowardly fellow who “lives off the land through his ill-gotten gains” – may have been named for one H. Hilliard Wimpee, who had worked with Segar at the Chicago Herald-Examiner.

Almost immediately, the character’s name inspired a brand name: Wimpy Grills, which opened its first location in Bloomington, Indiana, in 1934. At its height, the chain had 27 U.S. locations, but after the founder’s death in 1977 the trademark rights lapsed and the restaurants closed. The brand continued to thrive in the UK, South Africa, and elsewhere, thanks to an international licensing arrangement with J. Lyons and Co. The main attraction was, of course, hamburgers. 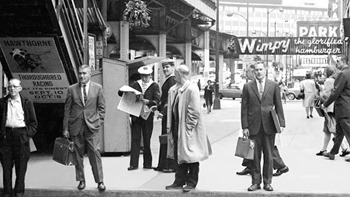 Last week was not the first time Donald Trump had earned the “wimp” pejorative. In March 2018, Chicago Tribune columnist Steve Chapman wrote that the president “melted like a chocolate bar on a hot sidewalk” when the North Korean dictator Kim Jung Un invited him to a meeting. The headline on the column: “Trump, the Wimp.” And in August 2018, former Democratic Congresswoman Elizabeth Holtzman observed of Trump’s reluctance to speak with special prosecutor Robert Mueller: “It’s kind of being a wimp.”

Wimp rhymes with, and evokes, simp (from simpleton) and limp; it carries insinuations of unmanliness (perhaps from that old meaning of woman) and shares an initial letter with weak. Like cuck and soy boy – two epithets that emerged from the current political climate – it betrays anxieties about masculinity and performance. It’s a potent linguistic weapon against a public figure who is “perversely insistent on his manhood,” as New York Times columnist Frank Bruni put it last year. The question is whether calling that manhood into question will provoke a dangerously spiteful overreaction.

Posted at 06:00 AM in Acronyms, Current Affairs, Epithet, Politics, Slang, Word of the Week | Permalink