It’s my final list of the year*, and possibly my last blog post of 2018, unless something unavoidable crops up. For Names of the Year, I do my best to follow the categories established by the American Name Society – personal, place, trade, artistic and literary, miscellaneous. I also take some guidance from the Baby Name Wizard blog’s name of the year contest, which is not limited to baby names.

In categorical order, then:

Beto. Although his heritage is Irish, the Texas politician born Robert Francis O’Rourke has been known since childhood as “Beto,” a common Spanish nickname for first names ending in -berto, like “Roberto,” to distinguish him from his namesake grandfather. During his dynamic (and ultimately unsuccessful) campaign for the U.S. Senate, he was often identified only by his nickname, and as a result sometimes mocked for “Hispandering.” But the combination of Hispanic nickname and Irish surname in fact is an authentic reflection of Texas’s population. Read more about “Beto” on the Baby Name Wizard blog. Stormy/Stormi. The pornographic-film actress and director Stormy Daniels (nee Stephanie Clifford) made headlines in 2018 when she became involved in a legal dispute with the sitting U.S. president, Donald Trump, and his attorney, the soon-to-be-felon Michael Cohen, over $130,000 in hush money she received from Trump via Cohen. Stormi was the name bestowed on the daughter, born in April, of celebrity personality Kylie Jenner, of the Kardashian Jenners. Here is how Jenner explained (or “explained”) the name: “I really don’t know how we thought of Storm … Her dad [Travis Scott] insisted it was him, but I feel like it was me. And that kind of just stuck with us. And then I didn’t really like just Storm—I didn’t feel like that was her name. So then it became Stormi. And it just stuck. … I feel like Stormi picked her own name, like it was just her name.” Read more about Stormy/Stormi on the Baby Name Wizard blog.

Paradise. The city of 27,000 in Butte County, California, was virtually leveled in the devastating Camp Fire that burned a 250-square-mile area in November. The town got its name in the 1860s, probably because of its picturesque setting, although a legend persists that it was named for the local Pair o’ Dice saloon. I wrote in November that Paradise is “a pretty memorable name, not least for its irony. But Donald Trump got the name wrong – not once but twice” – calling it “Pleasure” instead.

Parkland. The city in Broward County, Florida, was the site of a February 14 mass shooting at Marjory Stoneham Douglas High School. It quickly became shorthand not just for the tragedy but for a student-led movement – March for Our Lives – to raise awareness of gun violence and gun control.

Fortnite. The hot game – or “esport” – of the year was released in September 2017 and spread exponentially in 2018, attracting 2.8 billion views on YouTube in February alone. According to a CNN explainer, the name is a variation of fortnight (a period of two weeks; compressed from fourteen nights) because in one of the game modes, Save the World, players must “survive” for two weeks. The name has additional overtones of fort-building, knights, and darkness.

Very frustrated lady next to me at Gamestop: "My son Kevin wants Fork Knife for his birthday but no place has it in stock."

me: I think it's Fortnite.

Her: No. It's definitely Fork Knife.

QAnon. The name of a conspiracy theory that first appeared on anonymous Internet message boards – that's the "anon” part – in October 2017, and gathered steam in 2018. (The “Q” refers to “Q clearance,” a security authorization in the U.S. Department of Energy. Some people inferred from this that the author of the anonymous messages worked inside the federal government.) In the June issue of Harper’s magazine, Walter Kirn called the theory “a retread, for the most part, of Cold War–era John Birch Society notions found in books such as None Dare Call It Conspiracy; the QAnon posts “described a sinister global power struggle only dimly visible to ordinary citizens. On one side of the fight, the posts explained, was a depraved elite, bound by unholy oaths and rituals, secretly sowing chaos and strife to create a pretext for their rule. On the other side was the public, we the people, brave and decent but easily deceived, not least because the news was largely scripted by the power brokers and their collaborators in the press. And yet there was hope, I read, because the shadow directorate had blundered.” QAnon has crossed over into the non-virtual world of protests and even criminal action, and it has a cryptic slogan: wwg1wga, which stands for “where we go one, we go all.” 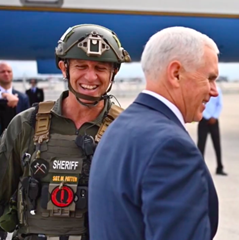 Vice President Mike Pence, right, with a Broward County, Florida, SWAT officer wearing a QAnon patch. (What is it about Broward County?) The officer was later demoted, but not dismissed.

Artistic and literary names (“names of fictional persons, places, or institutions, in any written, oral, or visual medium, as well as titles of art works, books, plays, television programs, or movies”)

Childish Gambino. The actor/writer Donald Glover, who stars in “Atlanta” on the FX channel and performs under the nom de rap Childish Gambino, released a provocative and hugely popular music video, “This Is America,” in early May, and spent much of the rest of the year on a “This Is America” tour. Where did Glover come up with “Childish Gambino”? From something called the Wu-Tang name generator. As an Uproxx reporter pointed out in 2014, there are (or were) two Wu-Tang name generators, and both of them yielded “Childish Gambino” when Glover typed in his name. This is an unusual coincidence, if not a unique one. (My own Wu-Tang name, in case you were wondering, is either Insane Professional or Magician Ungrateful.)

Gritty. The new mascot of the Philadelphia Flyers, a professional hockey team that had until then lacked any mascot, made its (his?) debut on September 24, and immediately provoked as many varieties of response as there are definitions for gritty.

“Left-wing activists made him a socialist meme and antifa hero: a blue-collar monster, reclaimed from its marketing creators, fighting on behalf of workers against the absurdities of capitalism,” reported the New York Times. “On October 24, 2018, the Philadelphia City Council passed a formal resolution honoring Gritty, declaring that he honored the city’s spirit and passion,” a Wikipedia entry tells us. According to SBNation, “The name ‘Gritty’ itself is an inside joke used as a descriptor by fans for any player who isn’t the most athletically talented, but still inspires overwrought metaphors.” The adjective gritty was first documented in the 16th century, when its sole meaning was “resembling or containing sand or grit.” It has signified “plucky, spirited, courageous, and resolute” since the mid-19th century, and “harsh; bleak, unsparingly realistic” since the late 19th century.

Wakanda. The fictional African country, created in 1966 by Stan Lee and Jack Kirby for their “Black Panther” comic, was brought to life in the 2018 film Black Panther. As I wrote in April, “Wakanda” (or Wakonda, Wacunda, or Wakunda) has a long history in North American place naming that predates the comic, and it also has shown up in other fictional works, including the original Ghostbusters movie. 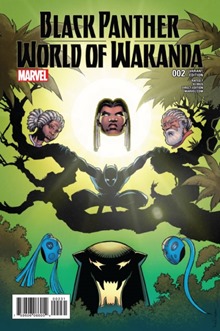 Miscellaneous names (names that don’t fit into any other category)

BBQ Becky and her siblings in white-caller crime (Brooklyn Becky, Permit Patty, ID Adam, Pool Patrol Paula, et al.). The nicknames were slapped onto “white people who’ve reported black people for sitting in Starbucks, shopping at CVS, mowing lawns, playing golf, staying at an Airbnb or napping on a couch in a college dorm,” as a USA Today story put it in July. The ad-hoc policing wasn’t new, but the viral social memes were.

Individual-1. On December 7, the special prosecutors in the Trump-Russia investigation submitted sentencing recommendations for Michael Cohen, one of President Trump’s former lawyers. In the filing, a party identified as “Individual-1” – who just happened to run “an ultimately successful campaign for President of the United States” – was named as the coordinator of payments to Stormy Daniels (see above) and former Playmate of the Year Karen McDougall. The deadpan combination of legalese and finger-pointing led to a flurry of taunts and memes.

Laurel/Yanny. Back in May, it seemed everyone was puzzling over an audio clip that sounded to some listeners like “Laurel” and to others like “Yanny.” The New York Times built a tool to test your own perception; Language Log devoted two erudite posts to the phenomenon, on May 16 and May 25.

For past names of the year, start with 2017 and follow the links at the bottom of the post.