Separated by a Common Language, the excellent blog of author and linguist Lynne Murphy, is hosting its annual Transatlantic Words contest, in which Lynne asks her readers: “Are there any US-to-UK or UK-to-US borrowings that are particularly 2018-ish?” Cast your vote by leaving a comment on her post.

This is a real perfume, folks.

I think the branding on this $240 perfume went wrong somewhere, take a hard look and see if anything sticks out pic.twitter.com/pasJc3xDxd

Speaking of trees, here’s the latest from Starbucks.

Zocalo Public Square, the Los Angeles-based publication that’s affiliated with Arizona State University, always has a bunch of articles I want to read right now. This one, about those place-name postcards popular in the U.S. in the 1930s, 1940s, and 1950s, is full of fascinating details. I hadn’t known, for example, that people who study postcards are called deltiologists, from a Greek word meaning “writing table.” Nor had I known that the most prolific producer of those postcards was a German-born immigrant, Curt Teich, who adapted the “Gruss Aus” postcards from his native country into “Greetings from” cards. 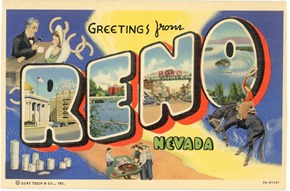 A medium-length read worth your time: Economist language writer Lane Greene looks at “who decides what words mean.” In 3,100 words, he explains the Great Vowel Shift, the distinction between language prescriptivists and descriptivists, and the etymology of buxom. (Lane’s latest book, Talk on the Wild Side, is a deeper dive into topics like these.)

One more thought-provoking essay: My Visual Thesaurus colleague Orin Hargraves warns Gmail users to resist using the service’s “smart replies.” Orin writes that if you do, “you are not only shortchanging your correspondent; you are training sophisticated robots to think that this is the sort of thing humans typically do.”

Speaking of robots, research scientist Janelle Shane fed cookie recipes into an artificial neural network – a kind of machine-learning algorithm – and it developed mysterious and hilarious new cookie names. Care to whip up a batch of Canical Bear-Widded Nutts? 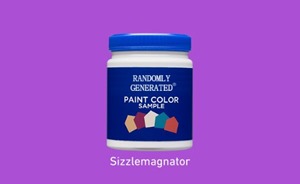 I’m kind of a fan of the “Nancy” comic, which was created by the great Ernie Bushmiller (1905-1982) and continued by different writers and artists since his death. (My Twitter avatar is a Nancy panel.) The latest “Nancy” artist is the pseudonymous Olivia Jaimes, who has been getting raves for updating the strip while remaining faithful to its off-kilter character. Jaimes keeps her (?) identity a secret, but she has recently given interviews to Go Comics and Vulture. And look! There’s a “Nancy” enamel pin!

Speaking of Nancy – yes, I’m all about the segues this month – here’s Lili Loofbourow with a smart analysis of how U.S. Congresswoman Nancy Pelosi (D-California) sidestepped the prevailing “battle” metaphors so beloved by political reporters. “Of her last words to Trump about preventing a government shutdown, Pelosi simply said, ‘I asked him to pray over it.’ … [S]he gave the impression, at least while she was saying it, of being sincere. It sounded like a simple statement of fact, an earnest expression of their shared public interest with only the thinnest trace of disdain.”

The Emmet Lee Dickinson Museum (named after “Emily Dickinson’s third cousin, twice removed – at her request”) is counting down to the end of the year with a new Word of the Year each day. (I’ll be publishing my own WOTY selections next week. Watch this space.)

Japan Times reports that the kanji of the year is “disaster.” (Hat tip: Motoko Rich)

Finally, some sad news. It’s 30 – that’s newspaperese for “the end” – for the excellent language blogs Lingua Franca and Oxford Dictionaries’ Weekly Word Watch, both of which I’ve enjoyed and occasionally plundered for years. In neither case was an explanation offered for the cut. It’s also the end of the line for the American Heritage Dictionary’s usage panel, a rotating group of language experts first convened in 1969 for the purpose of keeping an eye on the vernacular and upholding standards. For an excellent overview of the panel’s history and effect, read David Skinner’s essay in the Weekly Standard. And for more on the current state of lexicography, see this article by Rachel Paige King, published in August in the Atlantic online.