A new name? Not so fast.

Mailchimp has changed a lot since it was founded in 2001. In the beginning, it was a side project of a small web-design firm; the company name followed the popular compound-word trend of the era. (Compare PayPal, founded in 1998; Typepad, 2003; Grooveshark, 2006.)

The company survived, thrived, and diversified. And the name – never the company’s strongest feature, to be honest – began to look dated. Time for a rebrand?

Nope. Mailchimp is doubling down on its 17-year-old name. 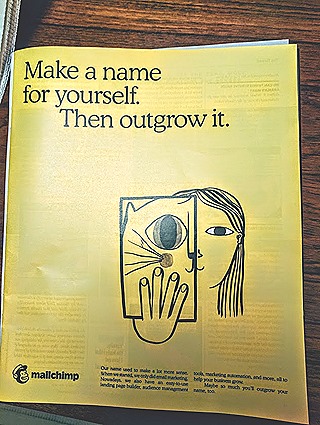 “Our name used to make a lot more sense. When we started, we only did email marketing. Nowadays, we also have an easy-to-use landing page builder, audience management tools, marketing automation, and more, all to help your business grow. Maybe so much you’ll outgrow your name, too.” – Full-page ad, New York Times Sunday Magazine, Nov. 18, 2018

I often advise companies to consider a name change when the old name isn’t telling the right story. (Even better: Don’t limit yourself at the outset with an overly descriptive name.) But creating a new name can be expensive, time consuming, and emotionally wrenching. Mailchimp has chosen instead to rebrand in a different way: by changing the story rather than the title. Instead of spending tens of thousands of dollars on a new name and logo, they’re investing in old-school advertising and friendly, new-style web design. Last year, they ran a cheeky campaign that explicitly mocked their own name; they even came up with a real product called Fail Chips.

The Mailchimp story caught my attention because I’d recently worked with a client in a similar situation. The CEO came to me because she was sure her 10-year-old company had outgrown its name. I love developing new names, but one look at this company’s website told me the name wasn’t the problem. In fact, it’s a powerful name (and a registered trademark, to boot); it just wasn’t being supported effectively. I ended up doing a verbal rebrand that changed everything but the name – tagline, elevator pitch, mission statement – so that the name now resonates more clearly. And I suggested some new directions for a much-needed visual reboot as well.

I’m looking forward to sharing the results of my everything-but-the-name rebrand as soon as the new site goes live. In the meantime, I’m getting a kick out of Mailchimp’s nose-thumbing at the conventional wisdom. Sometimes, the best way to change is to stay the same.

Terrific, Nancy! Your points apply to many areas of identity, including personal consumption.

Nestled against your post in my inbox is one from American Giant. Quick, what is this? Certainly not an "overly descriptive name". I respond very differently to the warm, retro MailChimp, So, perhaps for a future Fritinancy: Can a name be too generic?

Thank you again for your blog, one of my favourites!

Thanks, Duchesse! I have in fact written about generic names, of which American Giant is not quite an example -- it doesn't sell or represent American giants, after all. Here's a post I wrote about Neat Asian Things ("things" being about as generic as it gets): https://nancyfriedman.typepad.com/away_with_words/2012/02/names-in-the-wild-neat-asian-things.html And here's my post about the spectrum of distinctiveness: https://nancyfriedman.typepad.com/away_with_words/2013/10/the-five-types-of-names-or-why-suggestive-beats-descriptive.html