« November linkfest | Main | On the Visual Thesaurus: Speaking of fire »

Word of the week: Firenado

As if the wildfire devastation throughout California – and the thick, choking, persistent smaze here in the Bay Area – weren’t bad enough, the other day I learned about a new-to-me terror: firenadoes. 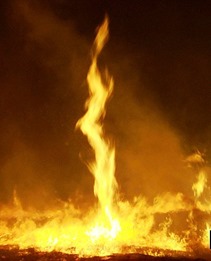 “I was pelted with debris and embers,” writes Robert Kerbeck, in the Los Angeles Times, about narrowly escaping the Woolsey Fire, near his Malibu Park house. “The force of the wind nearly knocked me over. I bent down to turn off the water and a firenado materialized in front of me. I could hear my son screaming inside the car. The only reason I didn’t catch on fire was because I was so low to the ground that the whirl of flames passed over me.”

Air that is warmer than its surroundings will rise because it is less dense. In the case of wildfires, the air is much warmer, so it rises rapidly.

The rapidly rising air creates a vacuum at the surface near the fire, so air from around the fire gets rapidly pulled in to fill the void, according to [meteorologist Evan] Duffey.

This is how fires create their own wind.

Firenadoes and whirls are created when this incoming wind meets and clashes.

The swirling winds of firenadoes carry embers and ash that get caught in the violently rising air. As the air is rapidly pulled up, it causes the swirling air to spin faster, causing a fire whirl.

A firenado isn’t a real tornado, as Dr. Wikipedia explains:

Fire whirls are sometimes colloquially called fire tornadoes, but are not usually classifiable as tornadoes as the vortex in most cases does not extend from the surface to cloud base. Also, even in such cases, even those fire whirls are not classic tornadoes, in that their vorticity derives from surface winds and heat-induced lifting, rather than a tornadic mesocyclone aloft.

I couldn’t find a coinage date for firenado, but it follows a pattern established by snownado, “an extremely rare instance of a waterspout forming under the base of a snow squall” that’s more accurately called a snowspout. In 2014, Mark Peters wrote about snownado and other snow- compounds; he linked snownado to the unexpectedly popular 2013 movie Sharknado. (The movie also spawned such novel compounds as ratnado, boatnado, and polarnado.)

As for the root of all this destruction – tornado – it comes to us via a series of mis-hearings and misspellings. The mid-16th-century word ternado was navigators’ word for a “violent windy thunderstorm in the tropical Atlantic,” according to the Online Etymology Dictionary. It was “probably a mangled borrowing from Spanish tronada, which means “thunderstorm” (from tronar, to thunder). The o and r were switched in English because of the influence of Spanish tornar, “to twist or turn.”

Posted at 06:00 AM in Fire, Portmanteaus, Word of the Week | Permalink