On the Visual Thesaurus: Speaking of fire

By the time you read this, California may finally be getting some long-overdue rain – and some desperately needed clearing of the wildfire smoke that has been suffocating us for almost two weeks. 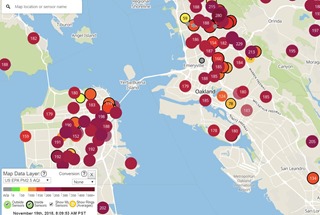 It’s been bad, but not as bad as in Butte County, where the Camp Fire is still not fully contained. Bay Area air-quality map via PurpleAir, November 19, 2018

For my latest Visual Thesaurus column I looked at how we talk about wildfires. (It’s a subject I’ve explored now and then here on the blog.) Full access is restricted to subscribers; (No longer paywalled!) Here’s an excerpt.

The November fires were caused in part by a drought so severe that it merits its own name: negative rain. “Every year we have a certain amount of rain that we expect as a result of historical patterns,” Andy Wood, a climate scientist at the National Center for Atmospheric Research, told The Daily Beast. “Negative precipitation [comes] when you have a departure from that.” When there isn’t enough rain, the air gets “thirsty” because it can’t pull enough moisture from the ground. A new tool developed by NOAA, the Evaporative Demand Drought Index, or EDDI, measures this “thirst.” It’s being used by farmers and ranchers in the West, and has also come up in analyses of the California fires. 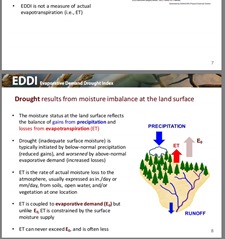 Blog bonus: The Camp Fire has virtually leveled Paradise, a once-lovely city of nearly 27,000 in Butte County, northeast of Sacramento. It’s a pretty memorable name, not least for its irony. But Donald Trump got the name wrong – not once but twice.

What's interesting to me is not that Trump sometimes misspeaks but how he reacts when he realizes. Rather than apologize, he'll always say "or (the correct word)," as if it's a subjective choice between the correct word and the equally valid word he used. https://t.co/4QFhIEGbJZ

UPDATE: The Baffler has a good story about the political and economic context for the fires, with a focus on the role played by the regional utility company Pacific Gas & Electric: “Despite the overwhelming evidence that PG&E has been responsible for some of California’s most grievous man-made disasters, time and time again, their executives have avoided substantive punishment in lieu of multimillion-dollar payouts to victims who have brought class-action lawsuits.”