In analyses of new names, beware the literalist, writes branding consultant Steve Manning. “The literalist will critique names based solely on dictionary definitions, reliably in the form of an objection. … The evidence they cite in their efforts to kill a name is irrefutable fact, yet completely irrelevant and counterproductive.”

The language of weight loss is changing, writes Amanda Mull in The Atlantic: “We’re optimizing our performances instead of watching our figure, biohacking our personal ecosystem instead of eating salads.”

My sweet Internet babies, it's SNOWING here, which reminds me that it's time to ridicule the 2018-19 Winter Storm Names, brought to you by <squints at page> Baby Abercrombie & Fitch. pic.twitter.com/wWwaZxhx5H

With its new Aviator SUV, Lincoln Motor Company is taking a “gimmicky but grand” approach to warning signals, reports The Truth About Cars:

Let’s say you’ve left your fuel door open like an idiot, or maybe attempted to drive off with the parking brake engaged. Instantly, the Aviator springs into action, booting up a live recording of a warning chime recorded by the Detroit Symphony Orchestra. In all, Lincoln commissioned six different non-critical warning chimes from the orchestra, covering 25 vehicle functions.

From humorist Tom Chitty, a few alternative definitions of “spelunking.” (I like “making fake calls to avoid small talk.”)

Lee Cartledge, a potter in North Yorkshire, has designed a completely nonfunctional Brexit mug, which, when you think of it, is completely appropriate. (Via Georgios) 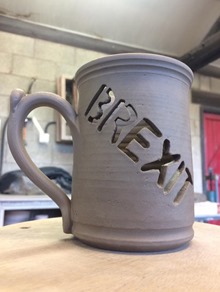 What to call the new foods of the future – the lab-grown meat, the garbanzo water, the milkless milks and eggless eggs? Writing for the Boston Globe, lexicographer Kory Stamper explores this brave new namescape, along with “the turbulent public life of margarine.” I am quoted on the unlovely “aquafaba.” (I, by the way, am on the record with my approval of “Soylent.”)

And here are a couple of my own recent posts: for Strong Language (on the f*ing midterm elections) and for Medium (“Hanging Out with the Godless,” my report on the Freedom from Religion Foundation convention in San Francisco).

This is off-brand, but important: the California wildfires are widespread and devastating. I live about 165 miles from the Camp Fire, in Butte County, but the air quality here in the Bay Area has been rated “unhealthy” or “hazardous” for more than a week. See for yourself: before-and-after views of Alcatraz Island. Yes, there are two photos there, top and bottom. N95 respirator masks have been in short supply; I finally bought one from a volunteer working with Mask Oakland, which sells masks to those who can afford them and distributes them to those who can’t. If you have a Venmo account, you can chip in. And you can help the Butte County communities directly affected by the fire by making a donation.