HODL FUEL – both words are shoutily capitalized, and the first word rhymes with “model,” like the name of one of Tevye’s daughters in Fiddler on the Roof – is a coffee company based in Vienna, Virginia, according to the trademark application filed by Hodl Strong Products on May 30, 2018, in International Class 32, “energy drinks.”

Coffee is the medium here, but the message is cryptocurrency, beginning with the name. Despite the all-caps styling, HODL isn’t an acronym; rather, it’s a misspelling of hold that’s a signal to “coiners” – members of the cryptocurrency alt-coin community – that this is a like-minded brand. 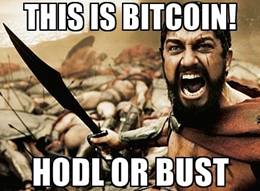 HODL – the verb, not the brand – “harks back to the dark days of 2013, when the price of bitcoin had a tendency to go down as well as up,” wrote Izabella Kaminska in the Financial Times’s Alphaville blog in December 2017. “In one particular panic-stricken moment, the bitcoin faithful — gathered as usual in their online chat forums — took towards outlining their coping strategies for what in hindsight became known as one of the greatest testing periods of the early adopter faithful.” On one such forum, Bitcoin Talk, a user called GameKyuubi published a stream-of-consciousness manifesto titled “I AM HODLING.”

I type d that tyitle twice because I knew it was wrong the first time.  Still wrong.  w/e.  GF's out at a lesbian bar, BTC crashing WHY AM I HOLDING? I'LL TELL YOU WHY.  It's because I'm a bad trader and I KNOW I'M A BAD TRADER.  Yeah you good traders can spot the highs and the lows pit pat piffy wing wong wang just like that and make a millino bucks sure no problem bro.  […]  You only sell in a bear market if you are a good day trader or an illusioned noob.  The people inbetween hold.  In a zero-sum game such as this, traders can only take your money if you sell.
so i've had some whiskey
actually on the bottle it's spelled whisky
w/e
sue me
(but only if it's payable in BTC)

It wasn’t, however, until the arch nemeses of all bitcoiners, the “nocoiner” Buttcoiners, stumbled upon the hilarious turn of phrase and began using it satirically that the phrase became a truly defiant battle cry for the long-only community.

HODL, however, is not a simple recasting of a buy-and-hold strategy. It’s much more than that. It is a cultic philosophy representing the greater strength of mind of the average bitcoin devotee compared to the flaky conventional day-trader.

It’s a testament to that cultic power that HODL has acquired a backronym definition: “hold on [for] dear life.” Here’s how the self-described “crypto advocate” HODLCrypto put it in a March 2018 post on Medium:

For those unfamiliar with Elliot Wave theory, it’s basically a form of technical analysis that traders use to analyze market cycles and forecast trends by identifying extremes in investor psychology, highs and lows in prices, and other collective factors.

This is precisely where the concept of “Hold on for dear life” comes in. Yes, it’s true that the term “HODL” originated from a typographical error committed by an early bitcoin adopter who was under the influence at the time; however HODL has become an iconic mantra for investors in the cryptocurrency community to encourage others to hold their coins and not panic sell under times of extreme volatility.

HODL FUEL, the coffee brand, is deeply intertwingled with cryptocurrency and blockchain. (Hence “Coffee for the crypto masses.”) The company’s mission statement begins with the first sentence of the U.S. Declaration of Independence and continues in a similarly lofty, if not syntactically elegant, mode:

It has been said that absolute power corrupts absolutely, and as history shows, centralizing that power often leads to tyranny. For perhaps the first time in modern human history, we have a choice to detach ourselves from the invisible chains that bound so many around the world. Cryptocurrency challenges the status quo. It is a unique opportunity to restore freedom and prosperity to all corners of the globe . Crypto is a system built by the people and for the people. Here at HODL FUEL, our mission is to support the Cryptocurrency community. We strive to aid in awareness, adoption and contribute to Crypto's future success. Plus, we are going to serve you a damn good cup of coffee along the way!

The theme continues with the names of coffee blends: Fight the FUD (“fear, uncertainty, doubt,” which coiners tell themselves to avoid), Satoshi Blend (named for the mysterious and possibly apocryphal creator of bitcoin, Satoshi Nakamoto), F*Ck Fiat (as in fiat currency, the legal tender issued by governments) and When Lambo? (for Lamborghini, the vehicle brand of choice for coiners who strike it rich). More cryptocurrency slang here.

No one was in the HODL FUEL pickup truck when I passed by, so I couldn’t satisfy my curiosity: Is it a delivery vehicle or just a mobile billboard?* Is HODL FUEL planning a move to the Bay Area? Will there be T-shirts as well as mugs? Is a decaf option out of the question?

I searched the HODL FUEL for answers to my questions, but found only this:

Cryptocurrency and Blockchain represent a technological revolution that has the potential to bring peace, prosperity and freedom to people at all corners of the globe in an unprecedented way.

It’s reassuring to know that although cryptocurrency and blockchain are revolutionary, marketing clichés like “one X at a time” are the same as they ever were.

Hey @Fritinancy nice article u wrote about @HODLFUEL & my truck. That truck was used to travel around the US pushing 4 LTC awareness & adoption. 44 days & 10k miles all the way to the Litecoin Summit on Sept 14-15, 2018. @HODLFUEL was a sponsor. Next tour is #IgniteTheFireLTC pic.twitter.com/ETTbi9RMLS

Posted at 06:00 AM in Food and Drink, In the Wild, Naming, San Francisco, Spelling | Permalink