« Word of the week: White-caller crime | Main | On the Visual Thesaurus: Speaking blockchain »

Penrose tiling is named for Sir Roger Penrose, the English mathematician who discovered it in 1974. Put as simply as possible, which is the only way I can begin to understand it, Penrose patterns don’t repeat – they’re “non-periodic” – and they have fivefold rotational symmetry. 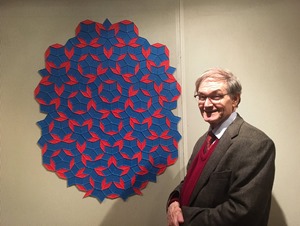 Sir Roger Penrose and an example of Penrose tiling at the National Museum of Mathematics. Penrose was knighted in 1994.

Sir Roger, who turned 87 on August 8 (and who came to San Francisco last week to deliver a keynote address at a symposium about the transit center), took the unusual precaution of patenting his discovery in 1979 – “undeniably an innovative step,” wrote Carl Morris, a Welsh web developer and consultant, on his blog in 2009; “but is it right to award patents to mathematicians who discover stuff that’s lying around in the Universe?” (Or, in this, case, possibly developed by medieval Islamic architects who neglected to record the mathematical principles that led to their creations?) 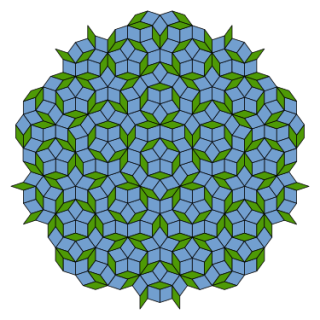 In any event, Penrose now owned a patent, so when, in 1997, his wife brought home some Kleenex toilet tissue that was quilted with what appeared to be a Penrose pattern – which allowed the paper to be rolled up without bunching – Sir Roger sued Kimberly-Clark, which owns the Kleenex brand, for infringement. And he won.

(You can read more about Penrose’s discoveries – which include the Penrose staircase and the Penrose triangle, both of which inspired the artist M.C. Escher – and the Kimberly-Clark suit in a 2000 article in Plus by Alison Boyle. The article contains a delicious quote from David Bradley, the director of Pentaplex, a U.S. company that joined forces with Penrose to create “fiendishly difficult board games”: “When it comes to the population of Great Britain being invited by a multi-national to wipe their bottoms on what appears to be the work of a Knight of the Realm without his permission, then a last stand must be made.”)' 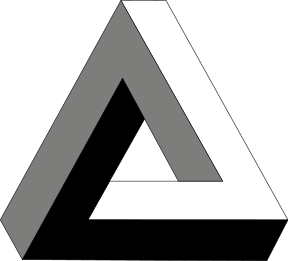 Needless to say, Pelli Clarke Pelli Architects, which designed the new transit center, asked for and received permission from the great man to use Penrose tiling in the structure’s exterior, which consists of 3,992 perforated aluminum panels. “It’s a rather pleasant design, isn’t it?” remarked Sir Roger during the pre-opening symposium.

You can read more about the transit center, and see some lovely photos of the interior, at Curbed. You can play with a Penrose pattern generator here. And just for fun, here are some photos I took of non-Penrosian elements of the transit center. 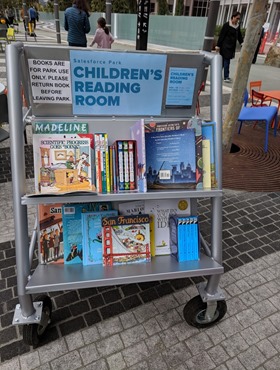 The roof garden has a large reading area with lending libraries for children and adults. There’s also a game cart. 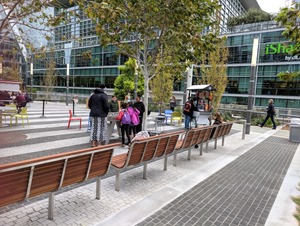 Foosball in the roof garden. Note to non–Bay Areans: This is what August looks like in San Francisco. It was 58°F/14ºC, with an eye-watering wind, at noon on Monday. You get used to it, sort of. 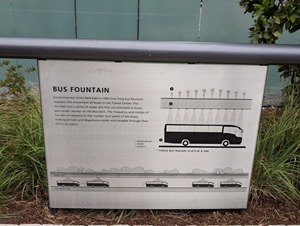 The rooftop Bus Fountain, designed by artist Ned Kahn, consists of 247 nozzles set four feet apart; it’s activated intermittently by the movement of buses below. It took 11 years to create. 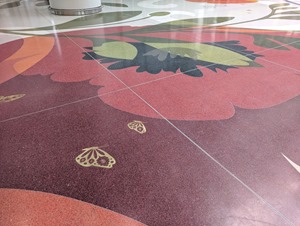 A portion of the Great Hall’s terrazzo floor, designed by Julie Chang. 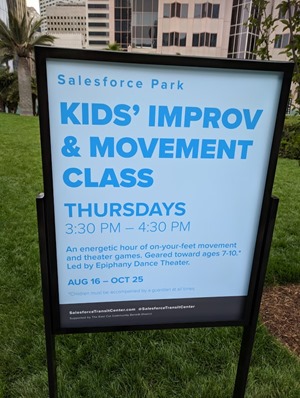 The roof garden is a public park, with free activities for kids and adults – from concerts to tai chi to writing workshops – scheduled throughout the year. 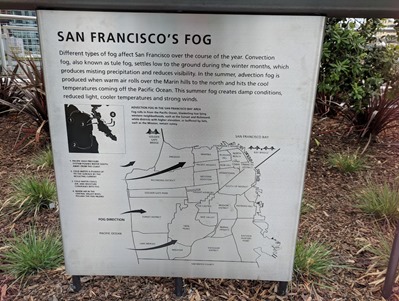 It’s impossible to convey the full scope of the landscaping – which includes a mini redwood forest, an aloe garden, and a stand of bamboo – but I did want to highlight the thoughtfully designed and well-written signs. 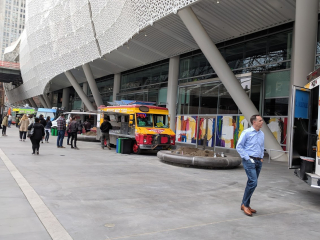 Food-truck alley outside the transit center, with Penrose tiling above

There’s an Oakland restaurant called Penrose that bears no relation to Sir Roger or his tiling; it’s named instead for the owner’s great-great-great-grandfather, Norwood “Penrose” Hallowell.

Posted at 05:03 AM in Art, Design, Eponyms, San Francisco, Science, Word of the Week | Permalink

I have a board game called CirKis that's based on Penrose tiling, though I hadn't realized that it is until now. (It is, unfortunately, not that great a game.)