Word of the week: Measles

On Friday, August 17, the Los Angeles County Department of Public Health reported that a case of measles had been confirmed in “a non-resident tourist” who had visited six Santa Monica businesses within a three-day period earlier in the month. No details about the tourist were provided, but at least two of the restaurants he or she visited – Ivy’s at the Beach and Chez Jay – are considered “celebrity hangouts,” with pricey menus that have no options for children. That could suggest that the person is an adult, even though measles – a highly contagious viral infection spread by coughing or sneezing – is commonly considered a disease of childhood.

That is, it used to be a common disease of childhood, one that afflicted hundreds of thousands of children in the United States every year, and killed as many as 30 percent of them, usually from complications such as measles pneumonia. Measles can also cause blindness, mental retardation, and – in children born to mothers who contract the disease – permanent deafness. Overall, the risks are much greater for infected adults than for children, but it’s no picnic for kids, either. (Keep reading.)

When an effective vaccine was made available in the 1960s, the number of annual cases dropped to tens of thousands; between 1997 and 2013, after widespread vaccination programs, fewer than 200 cases were reported each year, and the disease was no longer considered endemic in the U.S. Then, in 2014, 610 cases were reported. In January 2015 alone, 60 cases were reported. In the first half of 2017, Minnesota alone reported 73 cases, mostly in unvaccinated children, many of whom were unvaccinated because their parents subscribed to thoroughly debunked theories about the supposed dangers of vaccines. 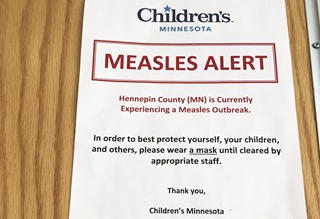 And those are just the U.S. statistics. The Pan American Health Organization reports nearly 2,500 cases of measles in the Americas in the first half of 2018, with more than 1,600 occurring in Venezuela – which has been unable to keep up with vaccination schedules because of the ongoing political crisis in the country. As Venezuelans flee to neighboring Brazil, the latter country is also seeing an alarming spike in measles cases.

The Spanish word for measles is sarampión, from Latin sirimpione, a kind of skin rash. The English word measles – always plural, sometimes with the – is of uncertain origin. It first appeared in print around 1325; the OED says it may have come from Dutch masels or Low German maselen, both of which mean “a spot on the skin” or “a blood blister.” The reference is to the disease’s characteristic red rash. Measly, which since the mid-19th century has meant stingy or insignificant, originally meant “having the rash of measles”; it first appeared around 1598 in reference to pigs afflicted with cysticercosis, a parasitic infection unrelated to human measles. “The meazels!” – an exclamation that was used in the 17th century (“Why the meazels should you stand there?”) – may reflect, through its similarity to “why the devil” or “why the hell,” the fearsomeness of the disease. 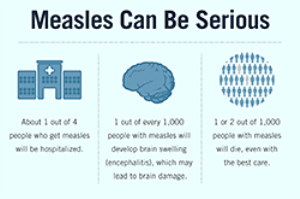 Because, believe me, it can be fearsome indeed. I contracted measles just before the vaccine was widely available. I spent two weeks in bed, burning with a 104°F fever and aflame with itching all over my body. My eyes oozed and swelled shut; the room had to be kept dark to prevent me from losing my eyesight. The only remedies were cold compresses and calamine lotion to soothe the relentless itching. (My skin was so hot the calamine lotion immediately dried and cracked.) I still remember my febrile hallucinations.

My parents had had measles themselves, and were immune. My younger brothers were whisked off to the public health department to be vaccinated; they never got the disease.

So indulge me a bit of editorializing: I have no patience with so-called antivaxxers. Measles is not a trivial disease that “makes kids’ immune systems stronger”; in fact, it can compromise their immune systems for up to three years. You say you or your kids are unvaccinated and healthy? I was unvaccinated and healthy until, suddenly, I was dangerously ill. You may take your unvaccinated self, or your unvaccinated loved ones, on an airplane, a train, or a bus with infected people, or to a region where measles is endemic. You may simply be in a room – say, a doctor’s waiting room – with an infected person. You may go to a fancy restaurant in Santa Monica. You will be unprotected. You may suffer horribly. Your children may be damaged, or even die.

And it’s all preventable with a single safe vaccination. Please do it.

Posted at 06:30 AM in Current Affairs, Medicine, Word of the Week | Permalink

I'd forgotten that the measles vaccine wasn't available until that late. Fortunately my siblings and I survived them. I'm in Minnesota—that outbreak seemed like a time-warp. We seem to be in one now. We need more of your brand of editorializing. Thanks.

Thank you for this, Nancy. I'm older than you are, and in the 1950s our parents were very aware of how dangerous the measles could be. I remember the fever, the hallucinations, and how much light hurt my eyes. I loved school, and I hated missing so much of the end of first grade. Calamine lotion helped only a little, although it felt good to have my mother's caring hands smooth it on. There wasn't much else she could do, except read to me from the other side of the room, by a tiny lamp to illuminate only the book.
By the time my children were born, it was simply obvious that they would be immunized against measles among other things. There was no way I wanted my children to suffer such an illness.

Good one, Nancy. Interesting word and an interesting political problem. I also had measles and remember the hellish itching very well, even though I was only about five. Nicely worded warning at the end.