« On the Visual Thesaurus: That extra S | Main | How Havaianas got its name » 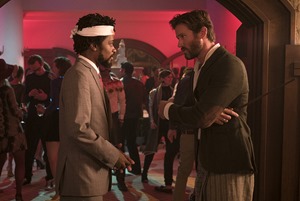 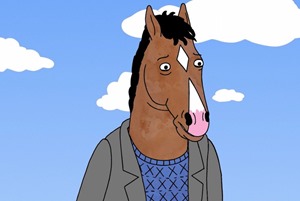 “Unexpected” doesn’t begin to describe it. As A.O. Scott wrote in his New York Times review, “If Mike Judge’s ‘Office Space’ and Robert Downey Sr.’s ‘Putney Swope’ hooked up after a night of bingeing on hallucinogens, Marxist theory and the novels of Paul Beattyand Colson Whitehead, the offspring might look something like this.”

And speaking of offspring: Unlike a centaur from Greek mythology, which has the head of a human and the body of a horse, an equisapien – a linguistic blend of equus (the horse genus) and homo sapiens (the extant human species) – has a horse head. (Also equine genitals, a major selling point.) The fictional WorryFree company has been engineering these chimeras because they’re stronger and more productive than human workers. 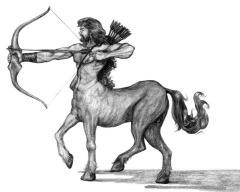 Centaur via It’s Something Wiki

There have been several attempts to analyze the equisapien angle in Sorry to Bother You. Writing for Mic, Anna Swartz saw the equisapiens as “part of a long movie tradition … an allegory with multiple meanings”:

They are the warped faces of exploited workers, representing literal dehumanization at the hands of a corporate giant like WorryFree and the disturbing evils of unchecked capitalism. The rhetoric about the horse-people also evokes racist stereotypes rooted in slavery; Lift’s focus on their strength and sexuality (the size of the horses’ penises comes up multiple times in the film) sets up the exploitation of the horse people as a metaphor for race, and for subjugation that denies the humanity of the oppressed.

And writer-director Boots Riley talked about his vision of the equisapiens in an interview with Thrillist:

You have a world in which everybody is accepting slavery and now that he’s hawking their labor, I thought, there needs to be something that shakes him to his mortal core. Somehow I came up with the genetic manipulation idea. But one part of it is just an artist thing: Genetic manipulation has kind of been done, so what’s an animal that hasn't been done and what also makes sense for Steve Lift?

I don’t think [a horse] has really been done before in movies. And two, horses occupy a space of labor for us and it rings out in our lingo: Workhorse, working like a horse, horsepower. And then obedience, like: Dumb as a horse. Hung like a horse. I had a girlfriend at the time who was really into English riding and was really obsessed with horses and claimed it wasn’t sexual. I’m not saying it's wrong that it was, but it was not recognized. That was part of where all that came from.

In fact, a horse-man hybrid has been on our screens for a while, starring in the animated Netflix series BoJack Horseman, which debuted in 2014. The show was created by Raphael Bob-Waksberg, but its protagonist was created by Bob-Waksberg’s high-school friend Lisa Hanawalt, who as a kid had been “so obsessed with horses that she sometimes walked on all fours,” according to a 2016 New York Times Magazine story about the show. Hanawalt, who didn’t draw on computers, created a series of watercolors of the main characters.

A horse is a horse (of course, of course), but a horse-man is unsettling and “scary,” as Miles Surrey wrote in The Ringer. He went on: “But frankly, that a CEO turning people into a mutated, cheap, and easy labor force doesn’t feel like too much of a stretch is the scariest part of all.”

That got me thinking about another horse in recent entertainment news: comic John Mulaney’s horse in the hospital:

This guy being the president, it's like there’s a horse loose in a hospital. I think eventually everything’s going to be OK, but I have no idea what's going to happen next. And neither do any of you, and neither do your parents, because there’s a horse loose in the hospital. That’s never happened before! No one knows what the horse is going to do next, least of all the horse. He’s never been in the hospital before, he’s just as confused as you are.

Mulaney's (@mulaney) "horse in the hospital" riff was dubbed the best political joke of the Trump era for calling out the "constant panicked drivel of the 24-hour-news cycle" https://t.co/KFANYrn6yV

* If you’re interested in how the equisapiens were created for the movie, there’s some information in this IndieWire story. Spoiler: Puppeteers were employed.

Posted at 06:30 AM in Animals, Film, Myths, Portmanteaus, Word of the Week | Permalink

I don't know how I missed that John Mulaney bit when people were talking about it recently, but that was fantastic.