The answer appears straightforward enough: baws are balls, or testicles; a bawbag is a scrotum. (Other derivatives  include bawhair, “a unit of measurement for the thickness of a pubic hair,” fannybaws (vagina + testicles, “a term of ridicule”), and bawheid, “ballhead, bald, empty headed, stupid”). But as Rebecca Bunch of “Crazy Ex-Girlfriend” would put it, it’s a lot more nuanced than that. 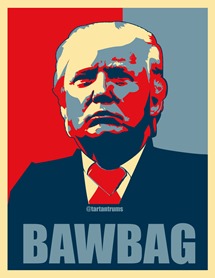 Source: the nicely named Tartantrums (“Because you’re either Scottish or you want to be”)

In August 2016, when bawbag was added to the UK-based Macmillan Dictionary’s crowdsourced Open Dictionary, the definition noted that the “very informal” word was “in Scots vernacular a term of endearment but in English could be taken as an insult.” In a Macmillan blog post about the addition, Liz Potter called bawbag “slightly risqué” and “a colourful piece of slang.” The American English equivalent does not have the same affectionate overtones.

A couple of events led to bawbag’s prominence in 2016. The first was the lingering memory of an intense 2011 storm formally known as Cyclone Friedheim and informally as Hurricane Bawbag. The storm brought winds of up to 165 mph to parts of Scotland; about 150,000 households lost power. During a television interview, Scottish Parliament member Rob Gibson used “Hurricane Bawbag” without apology or explanation. 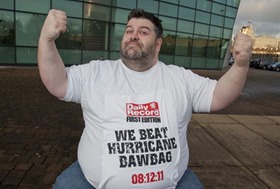 The second event was the June 2016 visit to Scotland of Donald J. Trump, then the presumptive Republican nominee for president. The Guardian reported that “bawbag” was

one of the many insults levelled at the US Republican party’s presidential candidate when he arrived in Scotland earlier this summer – the Daily Record reporting that anti-Trump protestors held up signs reading “Trump is a bawbag”.

After the November 2016 election, the hashtag #PresidentBawbag began trending on social media. It continues to be popular.

While the President is in Scotland, it’s only right that he learns a little bit of the lingo, particularly terms like bawbag that will almost certainly come his way... #bawbags #keepemtidy pic.twitter.com/glcn9taeQY

As you can see from that last tweet, there’s a brand-name angle to bawbag, too. Established in 2007 and headquartered in Edinburgh, Bawbags Limited makes underwear for men (naturally) and also for women (slightly perplexingly). The company supports sports teams and two cancer charities; one of the latter is Orchid, which is a terrific name for a male-cancer organization. (Orchis is Latin for testicle.) 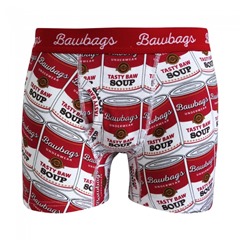 Bawbags’ brand language is, well, cheeky. The Cool De Sacs collection, for example, is made with the serious-sounding Technical Wicking Active Technology, the acronym for which is TWAT. Have some feedback? Send an email to sniffin@bawbags.com.

Bawbags wasn’t the only Scottish company jumping on the Trump-mocking bandwagon. Glasgow Live reported that Tennent’s Lager was introducing 330ml cans suitable for “tiny hands.” (President Bawbag was first called a “short-fingered vulgarian” by Spy magazine in the 1980s.) 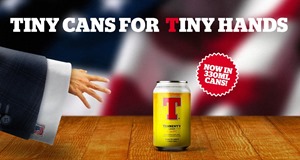 Other epithets seen on Scottish protest signs last weekend include tangerine wankmaggot (an invented slur), big fat roaster (“someone who is making a complete cunt of themselves”) and radge orange bampot (mad orange simpleton).

More signs from the protests in England and Scotland here and here.

Posted at 06:30 AM in Epithet, Politics, Slang, Word of the Week | Permalink

If the Scots learned Yiddish, ohmydog would that be a triumph of malediction!