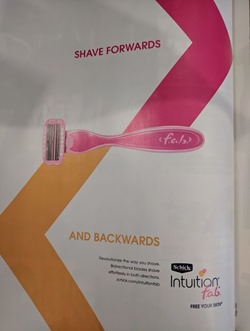 In fact, as I discovered in my research, it’s a very old one. Access to the full column is restricted to subscribers; here’s an excerpt:

Wherever English is spoken – yes, even in these United States – we crave those -s endings, copy editors be damned. When we talk, and when we submit unedited prose, we add esses all over the place. For all sorts of reasons.

Take -wards. In Old English it was spelled -weards, and it developed concurrently with -weard, now spelled -ward. Both suffixes had the sense of "having a specified direction," and they were used in lots of fixed ways – outward, homeward, westward, the now-obsolete fromwards – and some ad-hoc ways, too: Newton-wards, Troy-wards, God-wards. The OED's usage note just shrugs about when to prefer -ward over -wards: "The choice between them is mostly determined by some notion of euphony in the particular context; some persons, apparently, have a fixed preference for the one or the other form." But the note goes on to split hairs in a way that I'm guessing many readers would find a bit overzealous:

Where the meaning to be expressed includes the notion of manner as well as direction of movement, -wards is required, as in 'to walk backwards&', 'to write backwards'. In other instances the distinction seems to be that -wards is used when the adverb is meant to express a definite direction in contrast with other directions: thus we say 'it is moving forwards if it is moving at all', but 'to come forward', not 'forwards'… ; so 'to travel eastward' expresses generally the notion of traveling in the direction of an eastern goal, 'to travel eastwards' implies that the direction is thought of as contrasted with other possible directions.

Maybe that's why American editors decided to go with a single s-less standard: Having to follow this logic, especially on deadline, can make a person go crazy-wards.

Read the rest of the column, in which I train the s-scope on maths, mines, and gots.

On both sides of the Atlantic, our urge to stick an s onto the ends of words can be so overwhelming that we make possessives out of trademarks that aren’t possessive. The department-store chain Nordstrom was co-founded by Carl Nordstrom, but it’s never been “Nordstrom’s.” Still, many people feel compelled to give it the same possessive flourish as Macy’s, the retail company founded by Rowland Hussey Macy in 1851. Even more perplexing is “Tesco’s.” The name of the British supermarket chain is Tesco, an acronym of the surnames of the company’s first supplier, Thomas E. Stockwell, and its founder, Jack Cohen. There was no Mr. Tesco, proprietor, to be honored with a possessive -s.

Posted at 06:26 AM in Editing, Spelling, Visual Thesaurus | Permalink

The store name that really drives me nuts is Joann (or Jo-Ann or however they style it). Everyone calls it Joann's, which makes sense, since Joann just sounds like the name of a person, not a store.

Dan: You would hear "I'm going to Nordstrom" from me.

Nancy: Today I asked a friend who frequents the Chanel store at Nordstrom how she would articulate that statement. She replied, "I'm going to Nordstrom."
You're right; I'm wrong. But I would never go to Nordstrom's anyway.

Out here in Warshington state, where Nordstrom's started, lots of people say just that. Lots of people also say warsh, as in the state's name. Or is it state name?