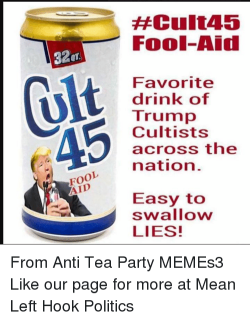 Trump wants his #Cult45 followers to think a jokey 7-word text between two FBI agents "will go down as a dark and dangerous period in American History!"

Meanwhile, his #AmericanGestapo is terrorizing families and horrifying the world: https://t.co/HCowVQMRMY

Cult’s origins are religious: Latin cultus is “an act of worship”; Middle French culte was associated with the veneration of saints or holy relics. The word is related to cultivate and culture but not to occult, which comes from Latin occulere, "to cover over, conceal.” 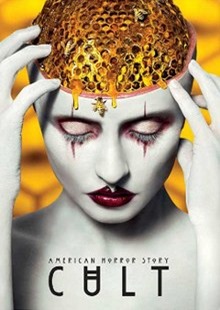 “Cult,” Season 7 of “American Horror Story,” is set in the aftermath of the 2016 U.S. presidential election.

Cult was imported into English in the early 17th century, rarely used in the 18th, and revived in the mid-19th century with the expanded sense of “devoted attention (not necessarily religious) to a particular person or thing.” Writers began referring to “the cult of beauty” and “the cult of Buffaloism” – the latter a quirky fraternal society, the Royal Antediluvian Order of Buffaloes, that was neither royal nor antediluvian – it was founded in London in 1822 – and had nothing to do with buffaloes. Cult of personality emerged in 1898 (in the New York Times!); the OED defines it as “a collective obsession with, or intense, excessive, or uncritical admiration for, a particular public figure, esp. a political leader” and notes that it is “frequently with totalitarian leaders (esp. Stalin) and their idealized portrayal by means of propaganda, manipulation of the mass media, etc.” Cult found new lexical life in the second half of the 20th century, which saw the rise in the U.S. of Scientology, the Unification Church (aka the Moonies), the Rajneesh movement, the Hare Krishnas, the Manson Family, the Branch Davidians, Peoples Temple, and Heaven’s Gate, to name only some of the era’s best-known groups. What all of them have, or had, in common was a charismatic founder who inspired blind devotion, sometimes to the point of literal self-sacrifice.

Is that what we’re seeing with #Cult45? Certainly Trump’s history as a hype merchant (see: Trump University, Trump Steaks, Trump perfume, et al.) suggests common ground with the likes of L. Ron Hubbard and Jim Jones. Certainly his campaign-rally boast that he “could stand in the middle of 5th Avenue and shoot somebody and I wouldn’t lose voters” – which, as Snopes points out, was less an expression of murderous intent than a tribute to his followers’ unwavering loyalty – suggests a casual willingness to assume the mantle of cult leader.

In his essay “Explaining Cult45,” published in Logos in 2017, the sociologist Darren Barany observed that Trump and Trumpism may “reflect a kind of ideological and social media- and reality TV-mediated fascism, where individuals internalize proto-fascistic precepts but believe they are fighting for ‘freedom’ or ‘liberty’ over and against a straw-man they may themselves recognize as a kind of liberal tyranny.” Trump’s followers, Barany wrote, “are ardently following Trump and seem to truly identify with his pervasive Tweeting, TV huckster persona, and phony billionaire bourgeois pageantry.”

No cult, no cult! the MAGA crowd would likely protest. Channeling them, Alexandra Petri, author of a satirical column for the Washington Post, wrote last week:

Posted at 06:30 AM in Art, Politics, Religion, Word of the Week | Permalink

The only differences between a "cult" and mainstream religion are how long it's been around, and how many adherents it has.
Imagine if Catholicism had 400 members, total, and had existed for 6 years. Priests in outlandish hats swinging smoking vessels, chanting in a foreign tongue, feeding the body of God to members, venerating relics of holy people, tithing, misogyny (never mind—that's mainstream), a leader in a far-away country. Sounds like a cult to me.

Both sides are the same - "The cult of the omnipotent state has millions of followers in the united States. Americans of today view their government in the same way as Christians view their God; they worship and adore the state and they render their lives and fortunes to it. Statists believe that their lives -- their very being -- are a privilege that the state has given to them. They believe that everything they do is -- and should be -- dependent on the consent of the government." ~ Jacob Hornberger