Within a single week I spotted two full-page ads for Oatly* oat beverage on the back covers of magazines. 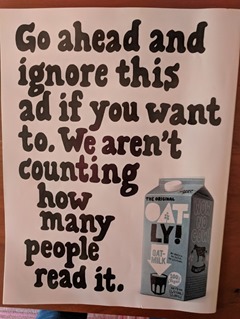 This one says nothing about the product or its benefits and everything about how clever the company thinks it is. (“Yeah, that’s right – this is print, not digital. Hahaha.”) 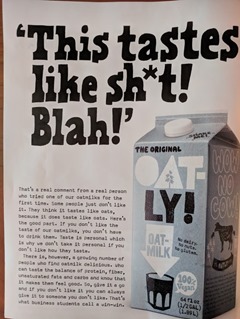 Nothing like a slightly censored swear word to get your attention, right? And now you’ve associated Oatly with shit. Forever.

According to an admiring post on The Challenger Project blog, the decision to use the “shit” quote (which came from a customer trying Oatly for the first time) was “brave,” as was the hiring of a creative director with no experience in the food industry to transform Oatly “from a dull food processing [sic] into fearless [sic] challenger brand.” (Thanks to Braulio Agnese for the link to The Challenger Project, which is based in London. Oatly is based in Lund, Sweden.) Oatly also has no fear of long, rambling, self-referential web copy. Here’s a 130-word sentence filed under The Oatly Way:

Back 30 or so years ago there was no Oatly, just some researchers at a famous university in a country mistakenly known for polar bears roaming the streets, nerding out on ways to turn oats into milk and creating a production process to keep all the beta-glucans (big, scientific word for soluble fiber) intact so that we could go crazy making all kinds of oatmilks and oatcreams and oat spreads and a barista edition oatmilk and then share all of this oat history on our website so that one day you might happen to read how the first oatmilk in the world was invented and perfected and want to give it a try which, in the humble opinion of the guy writing this excessively long sentence, would be totally oatsome. 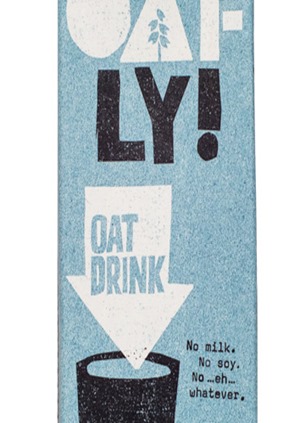 Oatly carton. “No milk. No soy. No …eh… whatever.” Whatever is a key shruggie indicator in new-attitude advertising.

And speaking of key: KeyMe was founded in New York 2012; it calls itself a “security technology company dedicated to revolutionizing the antiquated locksmith industry.” The company is making a big push in the Bay Area, as evidenced by the wall-to-wall ads — the term of art is “station domination” — I saw in the 16th Street/Mission BART station. 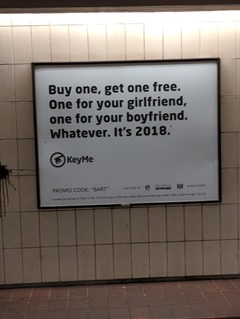 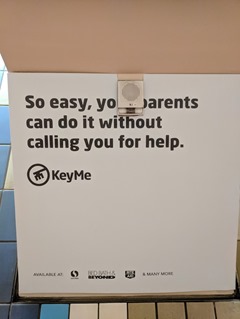 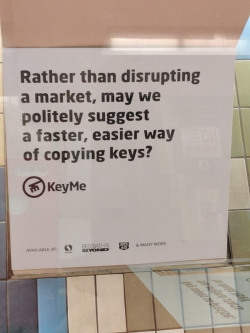 Disrupting a market: good for me, not for thee. Here’s a sentence from a September 2016 TechCrunch post: “‘KeyMe is poised to help tens of millions of consumers securely and conveniently copy keys at their local retailer,’ Greg Marsh, founder and CEO of KeyMe told me, explaining that the company is eager to disrupt what it claims is a $7.5 billion per year industry.” (Emphasis added.) In September 2017, KeyMe raised $25 million in Series D financing. 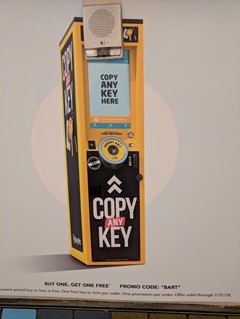 Here’s what a KeyMe kiosk looks like. (There weren’t any KeyMe kiosks at the BART station.) And here’s how it works, according to the KeyMe website: “Using advanced robotics and machine learning, KeyMe can scan your key, save to the cloud and print off a spare at any kiosk using just a fingerprint.”

I scanned Twitter (manually) and found half a dozen complaints about KeyMe copies that didn’t work. And then there’s this, which is hard to shrug off:

The keyme kiosks seems like a great and convenient idea, but giving some company scans to keys of my house is definitely a little concerning.

* Yes, Oatly is one of the many, many brand names that end in -ly.

Posted at 06:46 AM in Advertising, Food and Drink, Profanity, Technology | Permalink

I'm not a great fan of emojis or emoticons. But I do confess to finding some charm in the shruggie as a gesture of joyous futility. That's how I use it, anyway. https://app.box.com/v/OxfordHieroglyphics