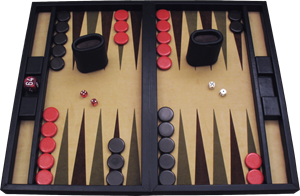 In the UK, gammon refers to ham that’s been smoked like bacon; the word comes from French jambon (“ham”), which in turn comes from Latin gamba (“leg”). Gammon has had this porcine meaning since the 1400s; its later meaning – beginning in the early 1800 – of “rubbish talk” (or, as we might say, bullshit) is related to a different gammon, which, spelled gamen, meant “game” in Old English. (As Ben Zimmer – yes, the same Ben Zimmer – observed in the Wall Street Journal last week, “The double meaning of ‘gammon’ in British parlance is reminiscent of a bit of American slang: ‘baloney.’”) Backgammon (“back play”) is probably derived from this gammon as well.

The hammy sense of gammon resurfaced last week in debates over whether the term was funny or racist. As the Independent put it: “Members of the British left have been invoking the hearty cut – routinely served with a fried egg and chips or a limp pineapple ring – as an insult with which to describe red-faced conservative men and Ukippers ranting about Brexit.”

The British children’s author Ben Davis claims (erroneously) to have coined the gammon epithet on election night 2017, when he was “three drinks deep” and picturing “those angry men from [the BBC One show] Question Time who were racked off with [Labour leader Jeremy] Corbyn’s reluctance to start a nuclear apocalypse. … The type that revel in their persecution complexes despite arguably being the most influential demographic in the country.”

Whatever happens, hopefully politicians will start listening to young ppl after this. This Great Wall of gammon has had its way long enough. pic.twitter.com/N0ZWI3wMuM

He says he now regrets the tweet, because gammon has since become “nastier” and “more weaponised.”

In fact, Davis had been beaten to the punch by a full five years by Caitlin Moran, who in 2012 fantasized in print that British Prime Minister David Cameron would storm “any fancy-dress competition that involved guests rigging up as ‘a C-3PO made of ham.’ His resemblance to a slightly camp gammon robot is extraordinary.”

The culinary gammon may be unfamiliar to most Americans, but the insult has had a certain appeal as the “Twitter left answer to snowflake,” as the writer Ben Judah put it. As wazzock was in 2012 – exotic, funny sounding, apt – so gammon seems to be in 2018.

Not everyone is amused. The left-leaning British writer Tanya Gold wrote in the British edition of GQ that calling a ruddy-faced man gammon is “like calling a Jew a k**e or mocking African Americans for eating fried chicken. It’s like calling poor white Americans trailer trash.” (Her asterisks, or possibly her editor’s.) All name-calling, Gold wrote, “is stupid.”

Fair enough. But we may still pause to admire Matthew Henkins’s spoof of Pulp’s “Common People” (1995). Click on the date in the tweet to read the whole thing.

Posted at 06:30 AM in British, Epithet, French, Politics, Word of the Week | Permalink