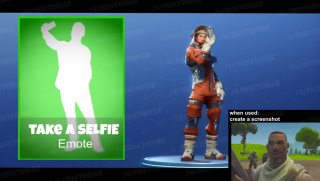 The earliest and most relevant entry for emote in Urban Dictionary is dated June 16, 2006:

A term used in MMORPG's [massively multiplayer online role-playing games] such as World of Warcraft which describes an action your character can perform which is usually accompanied by sound and sometimes even an animation.

The popularity of emotes and esports is no secret – Twitch, the Amazon video-game streaming platform that launched in 2011, had 15 million daily active users as of February 2018. (That’s 15 million people who watch other people play video games. Every day.) And Fortnite, which the New York Times’s Nellie Bowles called “the game that took all the best elements of building, shooting and survival games and merged them into one,” received 2.4 billion views on YouTube in February alone.

Increasingly, all that watching is taking place in public spaces. Bowles writes:

Those 150 million gamers in America want to gather. They want to sit next to each other, elbow to elbow, controller to controller. They want the lighting to be cool, the snacks to be Hot Pockets, and they want a full bar because they are not teenagers anymore.

Case in point: My hometown, Oakland, today celebrates the grand opening of the 16,000-square-foot Esports Arena (tagline: “Eat. Sleep. Compete.”) in Jack London Square. The arena’s website says the waterfront location “is named after novelist Jack London, regarded as The [capitalization sic] turn of the nineteenth-century innovator in the science fiction genre,” which is not at all how I remember the author of White Fang, Call of the Wild, and “To Build a Fire.” When gaming is under way at an esports venue like this one, live commentary is supplied by shoutcasters, a term that dates back to at least 2011. Gamers who overindulge to the point of repetitive stress injury may be treated by Levi Harrison, M.D., of Glendale, California, who calls himself the first esports doctor. On May 1, the Los Angeles Times reports, “esports pro players, coaches, owners and investors” gathered at the University of California, Irvine, “for multiple panels at the first ‘Deep Dive’ conference organized by Inven Global, an esports media company prominent in South Korea and more recently pushing its brand of coverage in North America.” Also last week, “4,000 or so investors and VIPs” convened at the Beverly Hilton Hotel at the Milken Global Conference – remember Michael Milken? the junk bond king? – to learn about, among other things, how esports are breaking into mainstream culture.

Esports will be a medal event in the 2022 Asian Games, and there have been discussions of introducing esports as a demonstration sport in the 2024 Olympic Games in Paris.

Curiously but perhaps inevitably, creating and watching emotes has led to imitating emotes in what passes for real life. “Fortnite dances,” in which athletes of the non-e persuasion perform moves that originated on a video screen, have become a common occurrence on baseball, soccer, and football fields in North America and elsewhere.  They’re kind of charming.

Posted at 06:30 AM in Contests, Puzzles & Games, Sports, Word of the Week | Permalink

I mostly watch football, and I am endlessly amused by the end zone celebrations that involve the whole team. Here's one highlight reel:

I can't find the one where the team pretends to be bowling pins, and one of the players "bowls" the football and knocks them all down.

The NFL has (naturally) a bunch of rules about what is and isn't legal for solo and group celebrations: