What kind of name is Emerdata? A bad one, and not only because the first thing Google asks you when you search for the name is “Do you mean Enerdata?” (an energy-data company), and the second image that appears in an image search is for EmerData (“Solutions for Emergency and Fire Safety Planning”). 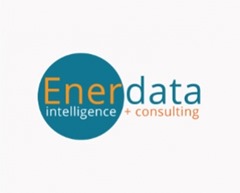 Nope, not this one, either.

The data part of Emerdata is easy enough to decode. I’m guessing the Emer part was clipped from emerge or emerging, although I suppose it could come from emergency or emeritus. Either way, what we have here is an example of what the Name Inspector, Christopher Johnson, called awkwordplay: a word that defies pronunciation because of a mismatch in syllable emphasis. 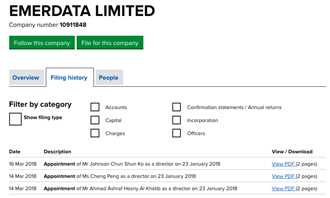 The business-filing form for Emerdata Limited. Via Medium. The company was incorporated in London on August 11, 2017.

In emerge or emergency, the stress is on the second syllable; in data, the stress is on the first syllable. But when we encounter a novel form like Emer, we default to a parallel pattern: We assume it’s stressed on the first syllable like ever or Esther. But when we do that, we lose the “emerge” sense of the root word; now we have something that suggests, say, emirates (probably the wrong association) or emerald (although that association requires a big leap of the imagination). (Or maybe, if we speak some French, we jump immediately to emmerder, a verb that can mean anything from the mild piss [someone] off to the sweary fuck [you]. And note the merde therein.) We’re also left in the dark about whether the first e of Emer is meant to be long, as in emerge, or short, as in emblem. 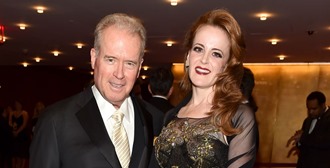 Robert and Rebekah Mercer. Via Town and Country.

And we haven’t even gotten into whether data is supposed to be pronounced day-ta or datta.

Whether or not the Mercer clan can actually claim billionaire status – the evidence is unclear – they and their co-directors certainly have enough money and clout to hire experienced, professional name developers who could give them a name that doesn’t lead to confusion, stammering, and embarrassment.

On the other hand, given their history, maybe obfuscation is exactly what they’re aiming for.

Update from Italian-English translator Licia Corbolante, who blogged in Italian about the name a couple of days ago:

in Italian #emerdata looks like "è [una] merdata" and it can't be unseen. It roughtly translates as a very productive act of defecation, or as something covered in shit, and figuratively also as something despicable

The "mer" could conceivably come from "Mercer," with the universal electronic e- in front of it ...

Jan: Possible, but seems a bit of a stretch; it's more likely just a dumb portmanteau like Analtech. http://nancyfriedman.typepad.com/away_with_words/2011/03/when-your-company-name-is-the-butt-of-a-joke.html

Oh dear, Analtech is still Analtech. I guess after 50+ years, they'll just sit on that name....oh wait, I see under "Company Info" down at the bottom of the website, they are now "Miles Scientific (previously Analtech)." Internet sniggering (that didn't exist 50 years ago) must have gotten to them.