« On the Visual Thesaurus: The Name of the Year Tournament | Main | April linkfest »

Word of the week: Truckle

“Well, Paul Ryan, you’re a free man now,” began the New York Times editorial that appeared on April 11, the day the Wisconsin congressman announced he’d be stepping down as House speaker and leaving Congress in January. Three paragraphs down, the editorial counseled Ryan about how to put his liberation to good use:

You don’t have to worry anymore about weathering a primary challenger from the far right. You don’t have to truckle before a blast of presidential tweets. You can use your remaining authority and credibility with your colleagues to pass legislation to make it harder for the president to fire Robert Mueller, the special counsel, and other officials at the Department of Justice. On your way out the door, on that crucial question, you still have a chance to put yourself on the right side of history.

To truckle before stands out in that paragraph. Its meaning is clear enough in context – something about deference, obsequiousness, sycophancy – but where does it come from?

It’s a verb that the Times editorial board has previously used at least once in the last two years. On July 22, 2016, just after Donald Trump accepted the Republican nomination for president, the paper published “Donald Trump’s Campaign of Fear,” which gave some credit to one of Trump’s primary opponents:’

Ted Cruz, Mr. Trump’s chief primary rival, has emerged as one of the few Republicans to look beyond this political cycle, consider his own honor, and refuse to truckle to the nominee.

(Things have changed since then.)

We’ve been saying to truckle (usually truckle to, sometimes truckle under, and occasionally truckle before, as Dickens did in his 1841 novel Barnaby Rudge) since the 1600s. It means “to submit,” “to act with servility,” or “to cower,” and its origins lie not in politics but in furniture. 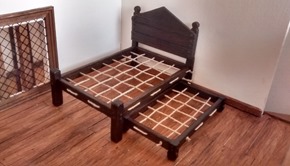 In the 1400s, truckle was a noun meaning “a small wheel with a groove in its circumference around which a cord passes.” Small, low beds on wheels – truckle beds – were pushed under higher, “standing” beds and pulled out when needed for children, servants, or guests. Modern versions are still manufactured.

If you’re North American, you probably call such an arrangement a trundle bed, not a truckle bed; until the early 1960s, British English included both but favored truckle bed. The nouns trundle and truckle have identical meanings but different sources: trundle is related to trend (from Old English trenden, to roll or revolve), while truckle comes from Greek trokhileia, “a system of pulleys,” and is related to trochee (the long-short metrical foot in poetry), trochanter (a part of the thigh bone), and truck (the vehicle). 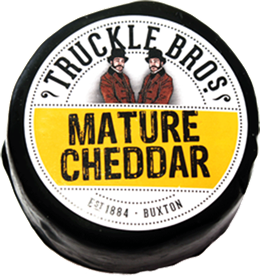 A truckle of cheese is cylindrical in shape. Truckle Bros. cheese via Bradburys Cheese.

The concept of a low, “subservient” bed gave rise to truckle the verb, which lost its original sense of “wheel” or “roller.” Trundle also became a verb in the 1600s, but it has stuck to a literal rather than metaphorical meaning: to move along by rolling, or to move slowly, noisily, or clumsily.

I was curious about whether truckle was related to two similar-sounding words, treacle and trickle. Nope! Treacle, which first appeared in Middle English, comes from late Latin triaca, which in turn came from Greek thēriaca, which meant “an antidote,” especially for snakebite; a therion is a wild beast. Treacle was used in reference to many plants assumed to have medicinal value; the late 1600s it became a synonym for molasses (a word that was borrowed from Portuguese melaços), and a century later it began to be used metaphorically: “something sweet or cloying.”

As for trickle, it’s not related to treacle or truckle, or to trick. The OED gives Chaucer’s Prioress’s Tale (1386) as the earliest citation, and for etymology says only “History doubtful.”

Posted at 06:30 AM in Current Affairs, Etymology, Food and Drink, Furniture, Word of the Week | Permalink