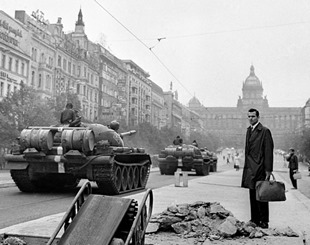 Tweets from the Tankie Awards account appeared to take for granted that readers knew what a tankie is.

We established the Tankie Awards to use comedy to bring attention to ongoing conflicts around the world & those employed to whitewash the targeting of civilians.

That's why the Tankie Awards 2018 will raise money for the White Helmets.https://t.co/4XA8HnkmNg

I did not, so I did some searching.* There’s a definition in the Social Justice Wiki:

A Tankie is an apologist for the violence and crimes against humanity perpetrated by twentieth-century Marxist-Leninist regimes, particularly the Soviet Union under Joseph Stalin (1924 - 1953). More broadly, the term may refer to any leftist who is perceived to support or defend authoritarian regimes on the basis that they are enemies of the United States.

Well, I’d never encountered it in the U.S. And Wiktionary places tankie’s origins across the pond.

A member of the Communist Party of Great Britain who supported the Soviet Union's policy of crushing revolts in Hungary in the 1950s and Czechoslovakia in the 1960s by sending army tanks into these countries.

But on Quora, where there are five answers to “What are ‘tankies’?”, one answer was written by a man who self-identifies as a “U.S. Pirate Party activist”; he calls tankie “a derogatory term coined by libertarian socialists who have long since learned the historical lesson that authoritarian government is synonymous with corruption and oppression.” The top-voted answer includes this clarifying sentence: “For a tankie, almost everybody who isn’t a Stalinist is seen as a traitor to the communist cause or, even worse, a ‘liberal’.” Another answer places the origin of the nickname in the 1956 Hungarian uprising against Soviet Communism.

Tankie remains a niche slang term in the U.S., but it seems to be widely accepted in the U.K. Tom Stoppard uses it in his 2006 play Rock ’n’ Roll, which is set in Cambridge and Prague. Two characters, Stephen and Max, have this exchange:

Stephen: Well, read the Morning Star and keep up with the tankies.
Max: The tankies … How the years roll by. Dubcek is back. Russia agrees to withdraw its garrisons. Czechoslovakia takes her knickers off to welcome capitalism. And all that remains of August '68 is a derisive nickname for the only real Communists left in the Communist Party. …

A 2014 obituary in the Independent (U.K.) for a Czech communist gave tankie prominent placement in the headline...

... and in the lede, which called Bilak

one of five hard-line Czechoslovak communists who in 1968 invited the Soviet Union to crush the passionate hopes aroused by the Prague Spring and invade their own increasingly reform-minded country with nearly half a million Warsaw Pact troops and some 2,000 tanks.

Tankie has had other lives (and spellings). In the early 1900s, as tanky, it was nautical slang for a navigator’s assistant. During World War II, it was used by Commonwealth troops to refer to a soldier from a tank regiment.

And in certain British circles, a tankie is a short-sleeved garment worn by a dog. This tankie may be related to tank top, although I’ve been unable to verify my hunch. 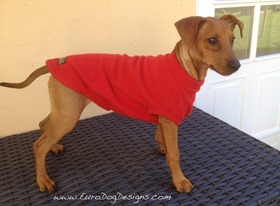 For more tank thoughts, see my posts on Tot Tank and on the political and journalistic uses of tank.

* I did recognize “White Helmets,” because I’d seen the Oscar-nominated documentary Last Men in Aleppo, about the volunteers providing emergency services to the victims of Syria’s civil war.

Posted at 06:30 AM in British, History, Politics, Word of the Week | Permalink