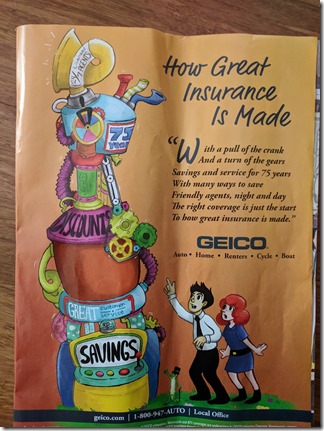 That ad is, if you’ll pardon the expression, a doggerel’s breakfast. The illustration is ungainly, the premise is unpromising, and the rhyme falls far short of the mark in more ways than one.

With a pull of the crank
And a turn of the gears
Savings and service for 75 years
With many ways to save
Friendly agents, night and day
The right coverage is just the start
To how great insurance is made.

Even if the ad were written in straightforward prose, I’d have trouble with the idea that “great insurance is made” via a Rube Goldberg-esque contraption. (I don’t see any “friendly agents” in that kludgy machine.)

Then there’s the verse itself. The first two lines follow anapestic meter (two unstressed syllables followed by one stressed syllable). The third line (which should be divided into two, to create a parallel couplet) is a combination of dactyl (DUM-da-da) and anapest (da-da-DUM). A period after “years” would help us know that the next line introduces a new thought. That fourth line, however, follows no established metrical pattern. And again: no punctuation, so we’re left with an enjambment – the continuation of a sentence without a pause. “Many ways to save friendly agents”? No, that can’t possibly be right. Also, just in case you weren’t sufficiently annoyed, save and day do not rhyme in English.

And the last couplet (or whatever it is)? Again: enjambment, scattershot scansion, bad rhyme. “Just the start to how great insurance is made” is worse than amateurish — it’s not natural-sounding, and “just” is ... well, just padding.

Not a great way to build confidence with customers.

Geico – which was founded in 1936, when rhyming ads were in their flower – isn’t the only brand trying its hand at rhyming ads right now. TransferWise, which is (what else?) disrupting the international currency-transfer business, was founded in 2011 by Estonians based in London. The company entered the U.S. market in 2016 and is currently running limerick-ish ads in New York subway cars. AdWeek called them “delightfully infuriating” and “mysteriously clever.” You be the judge. 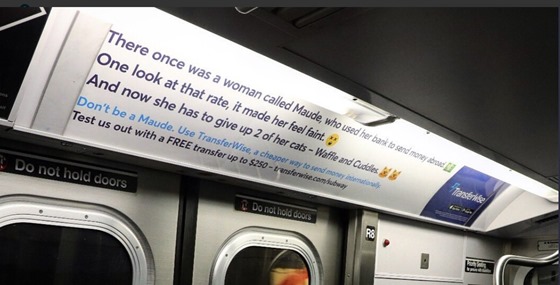 How not to disrupt a limerick.

There once was a woman called Maude, who used her bank to send money abroad
One look at that rate, it made her feel faint.
And now she has to give up 2 of her cats – Waffle and Cuddles.

The copywriting team of Colby Brin (American, from the sound of him) and Danny Stagg (British) “came up with a really fun narrative,” Stagg told AdWeek, about four characters who lost money because they didn’t use TransferWise. “One day we had what we thought was a great epiphany,” says Brin, “which is: the last line shouldn’t rhyme! Because it’s the consequence of them not using TransferWise, because things go wrong. We wanted the last line to hit with a thud.”

Mission accomplished! Unfortunately, every line hits with a thud.

Taking it from the top: Bad punctuation (no comma needed after “Maude,” but a period’s required after “abroad”), bad scansion, bad rhyme (rate/faint), use of numeral 2 instead of spelled-out two. 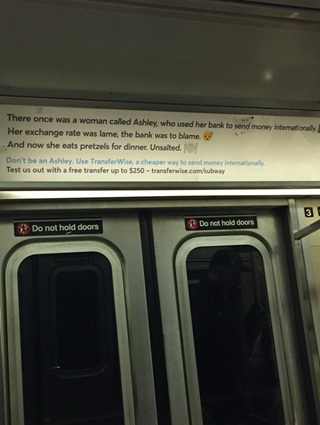 At least “blame” rhymes with “lame.”

I’m not alone in finding the ads neither delightful nor clever.

@TransferWise no offense but the pseudo-limericks in your subway ads are trainwrecks of rhyme scheme (it should be A-A-B-B-A) and bungled scansion. Next time hire an English major. pic.twitter.com/kAqrKTmoC4

Whoever is behind the @transferwise subway ads doesn’t know how a limerick is supposed to work and it’s driving me nuts.

I do agree with AdWeek that there’s something mysterious about the ads: The use of British called instead of American named strikes an off note. (For more on called, see Ben Yagoda’s Britishism blog.)

To be fair, in the larger scheme, TransferWise’s crimes against poetry may be less consequential than its other problems, including charges of misleading claims.

For some truly charming examples of successful commercial rhyme, see this collection of Burma-Shave ads, which appeared beside U.S. highways from 1927 through 1963. And to see how limericks ought to be constructed, see the Limericking Twitter feed. One of my favorite Limericking tweets accomplishes what neither Geico nor TransferWise could: clever concept, perfect meter and rhyme, and a puckish twist at the very end.

The top Senate Democrat, Chuck,
Appears to be trying his luck,
Accepting a pitch
Put forward by Mitch,
Who’s known to be sneaky AF.

For more on “AF,” see my Strong Language post.

Posted at 06:30 AM in Advertising, Rhyme | Permalink

Nancy, the Geico ad annoyed me too, and when you sailed into Limerickland, I felt my blood pressure rise. My vote for greatest ad limerick of all time was the (unused) one for Carnation Milk, submitted when they ran a contest.
You probably know it, but it's so much fun to post here.

Carnation Milk is the best in the land,
Here I sit with a can in my hand.
No tits to pull, no hay to pitch,
Just punch a hole in the sonofabitch.

Duchesse -- That Carnation rhyme is indeed famous, as are its many variations. However, it isn't a limerick (merely an A-A-B-B quatrain), and the contest story was, alas, fabricated: just "a joke-turned-urban-legend," according to Snopes. https://www.snopes.com/fact-check/carnation-slogan-contest/

Oh right, realized that not a limerick a while later. But I did believe the contest story, sine I read it in David Ogilvy’s book ages ago. Thank you!