An elegant name – evocative rather than descriptive – for a new kind of direct-to-consumer luggage company. The website copy is as thoughtful as the product design: “For us, all time away is time well spent.” And the companion online travel magazine has a perfectly complementary name: Here. 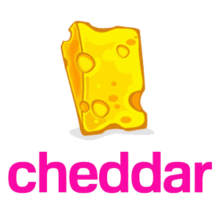 Cheddar calls itself a “post-cable network” for cord-cutters interested in business news, and its name is suitably fresh. Cheddar is a slang term for “money” that emerged in the last 20 or so years; the Oxford Dictionaries blog, while noting that the usage spread through hip-hop lyrics, is unable to assign a definitive etymology. (It may be related to “big cheese,” older slang meaning “important person.”) Fast Company says Dosist is “rebranding cannabis for the wellness crowd.” The L.A.-based company has also rebranded itself: It started life less than two years ago as hmbldt, which may have been meant to suggest Humboldt County, California, home to many cannabis growers; or Alexander von Humboldt, the Prussian explorer and naturalist (1767-1835). The vowelless name was a terrible idea, as it always is; the coined name Dosist is clever without being tortured: It suggests medicine and innovation. I don’t usually approve of branding-by-definition, as in the screen shot, but in this case it makes some sense. I’m less happy about the random use of ampersands in the copy. Proofreader, please! (For my previous takes on cannabis branding in the age of legalization, start here and work the links.)

This name made me smile before I even learned with the organization does, and I was even happier when I read the mission: “Help us protect our human heritage in outer space.” (I do wish FAM had gotten some advice about how to properly capitalize that tagline, though.) The name is a twist on a phrase from a 1962 speech by John F. Kennedy: “We set sail on this new sea because there is new knowledge to be gained and new rights to be won, and they must be won and used for all people.” Inexplicably, “people” was changed to “mankind” in a 1989 documentary about the Apollo space missions; the documentarians even altered the JFK clip. That’s annoying, but For All Moonkind is not: it’s clear, aspirational, and a little playful. 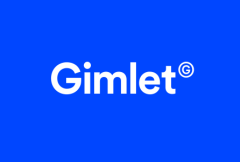 I first heard about this podcast production company back in 2014, when its founders made a candid series of podcasts about their struggles to come up with a company name. In the end, they got pro-bono help from the pros at Lexicon Branding. “Gimlet” has two apt meanings for this business: It’s a cocktail (suggesting something you imbibe and something that improves your outlook) and its a small, sharp tool (suggesting precision and incisiveness). I love the circle-G in the wordmark.

A job-search app that works like a dating app, Gloat allows candidates to remain anonymous to recruiters. The company, which is headquartered in Tel Aviv, originally called itself Workey, which must have eventually struck the founders (as it does me) as too childish and trivial. Gloat, on the other hand, is a powerful old verb; it means “to regard with great (often evil) pleasure or satisfaction.” It evokes an emotion and suggests a benefit, two things that set it apart from competitors with names like Jobs, JobAware, or JibberJobber.

A good name doesn’t have to be short; sometimes seven syllables are more effective than one. Internet of Elephants, which is based in Nairobi, is committed to “making conservation ferociously fun” (nice tagline) through an app called Safari Central; I read the name as a play on Internet of Things, or IoT, the network of interconnected “smart” devices that is taking over our daily lives. Internet of Elephants doesn’t focus narrowly on pachyderms; elephants are a large, vivid symbol of all endangered species in Africa.

Created by a partnership that includes the Mayo Clinic, OneOme is in the business of “making prescriptions personal.” Its name is a variation on genome, an organism’s complete set of chromosomes: by duplicating the suffix and changing a single letter, it conveys the message elegantly and succinctly. The double-O logo is a model of simplicity.

Would this name work for a processed-food company or a baby-clothes manufacturer? Of course not. But it’s hilariously well suited to a video-game producer whose only slightly tongue-in-cheek goal is “to destroy the productivity of mankind with endlessly entertaining games.” Super Evil Megacorp sounds as though it came from a Bond movie or an episode of “Futurama”; it’s so over-the-top you know they’re playing with you. And you, in turn, are playing with them. (For more on the positive side of negative names, see this post, and also this one. And for a bit about Super Evil Megacorp’s most famous game, Vainglory, go here.)

Don’t call Whill’s product a wheelchair: it’s an “intelligent personal EV” (electric vehicle) that looks cooler than my car. The name is a seamless blend of wheel and will – where there’s a Whill there’s a way? – with a suggestion, aided by that upward arrow, that you can conquer hills with this vehicle.