Mental-health professionals pointed out that if you want to prevent mentally ill people from committing crimes, language like “sicko” was not a step in the right direction.

President Trump described someone who would shoot up a school as a "savage sicko." NRA spokeswoman Dana Loesch called the Florida gunman "an insane monster" -- "nuts" and crazy." This kind of language about mental health could be harmful, experts say. https://t.co/cq5aedYQQW pic.twitter.com/UISK4fwSY3

It’s not the first time @RealDonaldTrump has used sicko. On September 23, 2013, he tweeted: “Huma [Abedin] should dump that sicko [Anthony] Weiner. He’s a calamity that is bringing her down with him.” (Context.) And last week he called the Parkland shooter “a sicko … a sick guy” during a meeting on school safety with state and local officials at the White House.

He’s also been the target of the sicko epithet. In December 2017, MSNBC host Mika Brzezinski called him a “sicko” after he sent a sexually suggestive tweet about Senator Kirsten Gillibrand (D-NY). (Fast-forward to 5:20 on the linked video.) The actor director Morgan J. Freeman also saw a “sicko” in the White House.

Our President is a bonafide “sicko.”

Sicko is derived from sick, which comes to us from Old English, where it has meant “physically unwell” since the ninth century C.E. and “morally or spiritually ailing” since the tenth. In the mid-20th century, sick took on an additional meaning, applied to jokes and comedians, of “macabre” or “cynical”; the label was first used by Time and Life magazines to describe the biting satire of Lenny Bruce, Mort Sahl, and other iconoclasts. 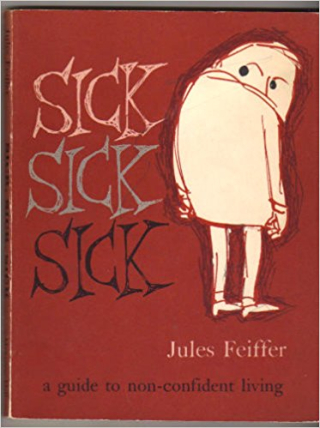 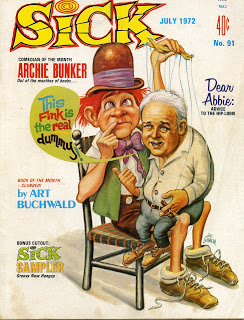 Sick magazine, July 1972. The satire/humor magazine was published from 1960 to 1980; the red-haired mascot was called Huckleberry Fink.

Adding the -o suffix to sick gives the word an especially insulting twist. The New Partridge Dictionary of Slang and Unconventional English identifies sicko as U.S. slang for “an emotionally or psycho-sexually disturbed person” and dates its origin to 1963 without providing a citation. It does provide a citation from Joseph Wambaugh’s 1978 crime novel The Black Marble: “She's a sicko. Some kinda fruitcake or somethin. She plays with her own clit when I’m lovin her up.” At the time he wrote the novel, Wambaugh was retired from the Los Angeles Police Department, where he’d been a detective; he may have been echoing station-house slang.

A sicko isn’t merely sick but perverted, twisted, or cruel. 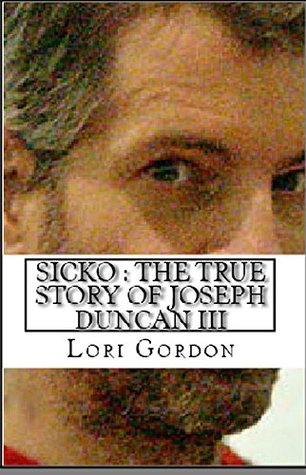 Sicko: The True Story of Joseph Duncan III (2016). From the Amazon copy: “Joseph E. Duncan III is a convicted serial killer, serial rapist, pedophile, family annihilator, stalker, abductor, and sex offender who is currently on death row in Terre Haute, Indiana awaiting his execution date. A cunning and manipulative child rapist, Duncan routinely subverted the system by having an affair with his own male psychiatrist.”

“Judge” Jeanine Pirro, a Fox News personality known for her on-air vitriol and décolleté, is also a crime novelist. In Clever Fox (2013) she uses sicko twice.

By the 1980s, sick could also mean “excellent,” an example of inverted meaning. Other examples include bad and wicked.

And the -o suffix? It’s a popular way to form new words in English, whether through truncation – memo (from memorandum, late 17th century), typo (originally from typographer, early 19th century), photo (1860, in a letter written by Queen Victoria), ammo (from ammunition, circa 1911), combo (from combination, 1920s), limo (from limousine, 1960s), oppo (from opposition, circa 1990)  -- or from appendage. The OED notes that beginning in the early 20th century, the addition of -o to a full or truncated word became increasingly common. Australian English is full of examples: arvo (afternoon), Salvo (a member of the Salvation Army), aggro (aggressive), muso (musician), and preggo (pregnant).

And so are British and American English. Three of the oldest examples of [noun] + [o] are bucko (a swaggering male, 1880s), kiddo (originally “pal,” 1890s; now used to denote one’s offspring), and wino (originally American, circa World War I). Adjectives also combine productively with -o: pinko (a left-leaning person, or “light Red”) came along around 1930; Ben Zimmer has antedated wacko (“a wacky person”) to 1938; and neato and weirdo appeared in the 1950s as part of the new hipster/jazz lingo. Daddy-o had been in the lexicon since 1913 or so, as an affectionate synonym for “father”; it was revived by jazz musicians in the early 1950s “as a general form of address, esp. between men, to indicate familiarity, amicability, or equality between the speaker and the person addressed” (OED).

Linguist Lawrence Horn explained the formation in a 2006 post on the American Dialect Society’s listserv:

O-suffixed branding neither began nor ended in the 1920s. Detecto, a brand of doctor’s scales, was founded in 1900 and is still in business. (Hat tip for the memory-jog and the photo: @lowdudgeon.) 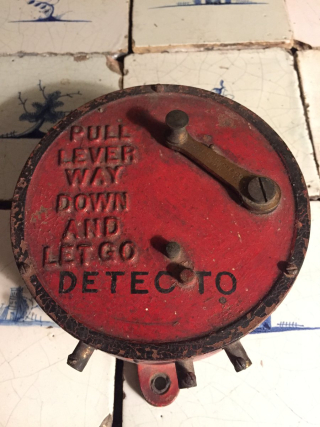 Brillo scouring pads (from brilliant) have been around since 1913; the game called Beano – the precursor to bingo – was popular in the 1920s; and Zippo, the lighter company, was founded in 1932. 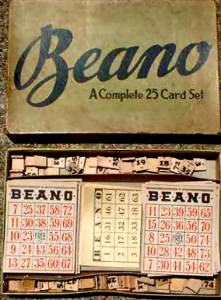 As for sicko, before its recent newsworthiness it may have been best known as the title of Michael Moore’s 2007 documentary about the U.S. healthcare system. The title underscores the cynicism and perversity of that system, in which giant insurance companies decide who gets medical treatment and who doesn’t. In short, it’s sick, sick, sick. 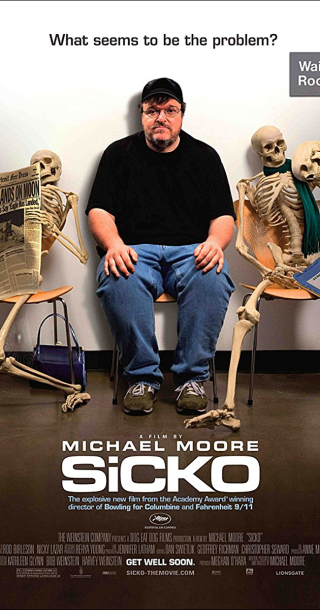 Nancy, I think that tweet belongs to Morgan J. Freeman the director/producer, not the actor Morgan Freeman.

MHGatti: You are so right.

Sicko indeed... the state of a society that allows such physically & mentally ill stuff.
A fascinating read, but definitely giving fruitcake a bad name.