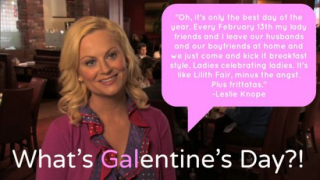 “It’s like Lilith Fair without the angst. Plus frittatas.”

The episode was so popular that Galentine’s Day made reappearances in Season 4 and Season 6. And it began spreading throughout real-life culture as well.

The unusual thing about Galentine’s Day, wrote Megan Garber in The Atlantic last year, is that it accomplished “something American culture hadn’t traditionally been too good at doing: celebrating, in an official capacity, the joys of female friendship.”

The festival, after all, filled a need. It found a market. Like Friendsgiving before it, which was similarly coddled in the crucible of the sitcom, Galentine’s Day acknowledged a broad truth about American life as it’s lived in the early 21st century: Friendships, increasingly, are playing an organizing role in society. Long conceived as side dishes to the main feast—marriage, kids, the nuclear family above all—friendships, more and more, are helping to define people’s sense of themselves in the world. During a time of emergent adulthood and geographic mobility, friendships are lending stability—and meaning—to people’s, and especially young people’s, lives. The deepest friendships are operating not to replace the family unit, certainly, but to complement it.

(For more on Friendsgiving – which was not, despite the rumors, spawned on “Friends” – see my 2013 post.)

Valentine’s Day is the number-three holiday in the U.S., consumer-spending-wise, so it shouldn’t surprise anyone that businesses try to boost their income by spreading the revelry over two days. I spotted Galentine’s Day marketing from sources high and low, mass and mini.

Yes, Wednesday is a big day, but Tuesday is better. Celebrate Galentine's Day with us on February 13th!

Ideas for how to celebrate in style: https://t.co/crkbU4TCb1 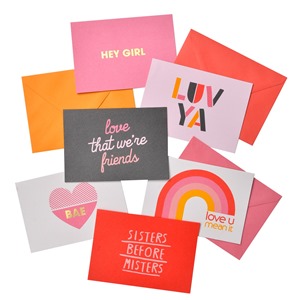 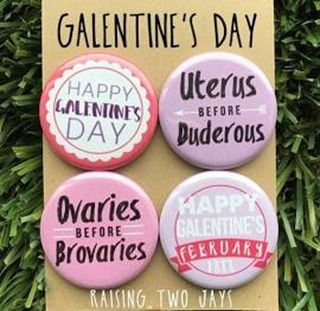 Via Etsy. “Uterus before duderous” and “Ovaries before brovaries” originated on “Parks and Recreation.”

* Really, though, weren’t all holidays invented by someone at some time?

Posted at 06:30 AM in Holidays, Retail, Television, Word of the Week | Permalink

My local Walmart currently has a section among all the other Valentine's stuff labeled "Galentine's Day." It's surprising that something so recent could have spread so much already.