« On the Visual Thesaurus: Take a number | Main | February linkfest »

It's shockingly simple. Last February the Republicans and Trump, the craven lackeys of the NRA made it easier for the mentally sick to buy assault weapons. They are responsible for bloodshed. May they choke on their thoughts and prayers.

Maybe instead of praying, you should have refused money from the NRA and acted to make it harder to get guns instead of easier, you craven, morally decrepit, despicable excuse for a human being. https://t.co/6lEXf3FiZI

Imagine being so craven you’d spin conspiracy theories about a mass school shooting. I spend so much time studying Alex Jones, but his total lack of decency never ceases to surprise me.

Somebody said it more eloquently than I after Sandy Hook, but if the murder of children won’t bring about stricter gun laws, what will? The murder of dogs? I’m not being funny. What will it take for the craven, complicit GOP to value life more than NRA donations? #gunreformnow

Craven means cowardly, afraid, weak-hearted; in these tweets, it signals that elected officials are too spineless to stand up to the National Rifle Association, which donates large sums of cash to congressional candidates during each election cycle.

Craven has been in our lexicon since Middle English, although where it came from is unclear. The OED cites a 19th-century theory that craven came from Old French cravanté; however, craven was never spelled with a final e, even when many English words retained it. At some point, craven became associated with the etymologicially unrelated (and much older) crave, which originally meant “to beg for apologetically” and now means “to fiercely desire.” As we’ll see, the connection between craven and crave has resulted in some strange decisions in the world of brand names.

Confusing the issue further, Craven is also a surname and place name. Both are very old and their origins unknown; the place name, in Yorkshire, is recorded (as “Crave”) in the Domesday Book (1086). A Wikipedia entry notes that “a Celtic origin related to the word for garlic (craf in Welsh) has been suggested as has the proto-Celtic *krab- suggesting scratched or scraped in some sense and even an alleged pre-Celtic word cravona, supposed to mean a stony region.” Craven County, in North Carolina, is named after William the 1st Baron Craven (1608-1697); there’s a Craven Community College and a Craven Hospital in New Bern, North Carolina.

One of William’s descendants, the third Earl of Craven, was a customer of the Spanish-British tobacconist Don José Joaquin Carreras, who named a special blend after him. Craven A cigarettes, introduced in 1921, were the first machine-made cork-tipped cigarettes on the market; the brand is now owned by Rothmans, Benson & Hedges Inc. and manufactured in Canada, Jamaica, and Vietnam. (Hat tip: Benjamin Dreyer.) Then there was the sixth Baron Craven, also named William, who built Craven “Cottage” in Fulham, London, in 1780. The building was used as a royal hunting lodge until it was destroyed by fire in 1888; after it was rebuilt it became the home ground of Fulham Football Club.

There are plenty of other Cravens as well. 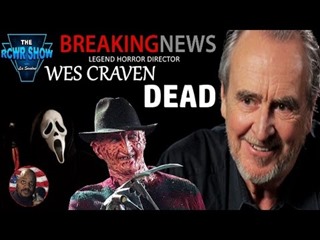 I don’t know whether horror-film director Wes Craven (1939-2015) was related to the British aristocrats. Image source.

Then there are the odd non-cowardly, non-surname Cravens, such as Craven Wings in Seymour, Tennessee. There’s no explanation of the name on the website, but it seems to play on “crave.” On the other hand, “chicken” is a synonym for “coward,” so maybe they want to have it both ways. 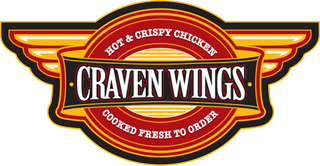 A restaurant-bar-lounge called Craven (“American comfort food”) was scheduled to open in Manhattan’s Hell’s Kitchen in September 2017. I haven’t found a single review or menu, only a link to the developer’s website. Maybe they backed out, cravenly. There’s a shop called CravenSpeed in “hipster Portland,” Oregon, that sells “super high quality USA manufactured aftermarket parts” for cars. The employee list doesn’t give surnames, so I can’t tell you whether the company name is eponymous, erroneous, or just hipsterish. (UPDATE: The answer is “erroneous.” In a tweet, Cravenspeed explained, “It’s just a joke, that’s all. If you like to go fast, you must be craven speed.” That would be cravin’. Big difference!)

“Craven” shows up, inexplicably, in fashion naming as well.

The “Craven” one-shoulder top from Alice + Olivia is definitely not for the craven. It’s marked down (a lot) at Saks Fifth Avenue.

Here’s an even cheaper “Craven” top. This one’s from Tobi. 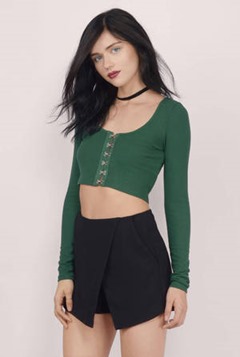 Here’s a Craven pump from Corso Como. Perhaps they were thinking about “quaking in your boots.” 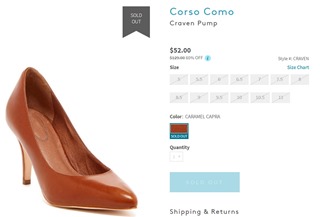 Finally, here’s the strangest craven I’ve encountered – and the one that, almost two years ago, got me started thinking about this mysterious word. It’s from a blog post by the former editor of Lucky, a defunct fashion magazine; she likes the idea of wearing a “party in a top” – something to wear at “crowded gatherings where all anyone takes note of is what you’re wearing from the waist up.”

I consider myself fluent in Fashionspeak, but I honestly have no idea what she’s talking about here. What is her, or Fashionspeak’s, definition of craven, and in what universe does it coexist with loud? Maybe she’s thinking about raving? I’m at a loss.

Meanwhile, if you want to do something about craven elected officials who don’t dare oppose the almighty gun lobby, here’s some food for thought. And here’s some more. And more.

Posted at 06:39 AM in Advertising, Current Affairs, Guns, Naming, Word of the Week | Permalink

Re: "I consider myself fluent in Fashionspeak, but I honestly have no idea what she’s talking about here. What is her, or Fashionspeak’s, definition of craven, and in what universe does it coexist with loud? Maybe she’s thinking about raving? I’m at a loss."

Okay, I'm going out on a limb here, but maybe the editor in question was thinking the party was "star craven loud" in that she was mishearing "stark raving" -- & that is why she used "craven"?