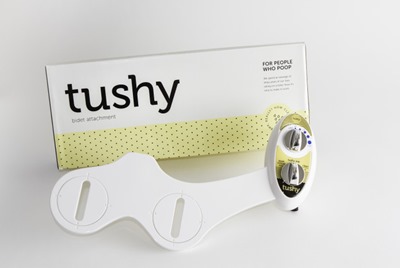 Tushy (rhymes with “pushy”) is a “clip-on bidet attachment” that, according to a recent New York Times article, “is designed to lure wellness-minded millennials, with its sleek iPhone-inspired looks and $69 price tag (the Tushy Spa, with a warm-water function, costs $84).”

Bidets aren’t unknown in the U.S., but Americans have been reluctant to accept them, despite periodic hopeful trend reports and attempts to rebrand them as “smart toilets.” They’re expensive, for one thing: as much as $6,500 per unit, not counting the cost of re-plumbing and re-wiring (for electronic models).

Tushy, on the other hand, is much cheaper and much, much brasher than the competition.

The founder of Tushy is Miki Agrawal, a Canadian of Japanese-Indian parentage who founded a menstrual-underwear company, Thinx, in 2011 and served as that company’s “She-E.O” (her term) until she was forced out last year after employees accused her of creating a toxic work environment. Like Tushy, Thinx is known for its shameless marketing. (I’ve written about Thinx both on this blog and on Strong Language.)

“Thinx” was derived from “thin” and “think.” But what about “Tushy”?

It’s a Yiddish word – or, rather, a Yinglish (Yiddish-English) diminutive originally used with and by children – that means “backside.” The non-diminutive form, tochis or tuchis, is derived from Hebrew tachat (pronounced with a guttural ch), which means “under” or “beneath” and has no specifically anatomical associations.

The OED’s earliest citation for tushie is from the “Among the New Words” feature in a 1962 issue of American Speech, although the word had certainly been circulating for many years by then:

Another bilingual children's diminutive, tushie—from Yiddish toches or tuches ‘rump’—has appeared in phrases like tushie slide ‘a slide down a slope on one's bottom’, the delights of which a group of Midwestern Jewish children have, I am told, expressed to their Gentile social workers.

You’d think I was a twenty-one-year-old girl; you'd think I hadn't wiped your backside and kissed your little tushy for you all those years.

“Throw out your hands / Stick out your tush / Hands on your hips / Give them a push / You’ll be surprised / You’re doing the French Mistake / Voilà!”

So how did a Japanese-Indian-Canadian get to be on speaking terms with a Yiddish-English diminutive? Probably through show-biz tummlers. In The Joys of Yinglish (1985), by Leo Rosten, one of the definitions for tush/tushy is “Neologism used by people in show business for that on which comedians land when completing a pratfall.” (Prat is a synonym for tush; it originated in the 16th century as criminals’ slang.)

In the universe of toileting brands, Tushy falls into the baby-talk sub-category: think of Squatty Potty (whose website also sells “other crap”), Poo-Pourri bathroom spray, and canine pooper-scoopers. Names like those are a far cry from competitors like the euphemistic Veil or Blooming, the chirpy Clean Sense, or the portmanteaued Swash—all brands of bidets. (The Swash bidet seat, manufactured by Brondell, is unrelated to the Swash line of laundry products manufactured by Procter & Gamble.)

Maybe Tushy’s impudent approach is what’s needed to break through the bidet barrier in the U.S. On the other hand, or cheek, a marketing video titled “I’m an Asshole,” which features an anus mascot and a mix of Anglo-Saxon and Yiddish words, may have the opposite effect. (Here’s the link. Trust me, you don’t want to search, as I did, for “tushy asshole.”)

On the other other hand, or cheek, if you’re looking for a serious investigation into the state of international toileting, I recommend Rose George’s tour de feces, The Big Necessity: The Unmentionable World of Human Waste and Why It Matters. While we’re snickering over tushies and potties, George writes, four out of ten people in the world have no toilet at all – and human feces in water supplies contributes to one in ten of the world’s communicable diseases. On its website, Tushy touts its partnership with Samagra, which provides free or low-cost sanitation services for poor people in India.

To me, the funniest use of "tuchis" is by The Stranger, played by Sam Elliot, in the movie, "The Big Lebowski." Elliot's western-accented basso delivery is perfect:
"Darkness washed over the Dude--darker than a black steer's tookus on a moonless prairie night. There was no bottom."

Tushy dot com is a well-known brand in, ahem, adult entertainment. Don't go there if you haven't already been. You won't like it. And if you have already seen, you already know. And cannot unsee.