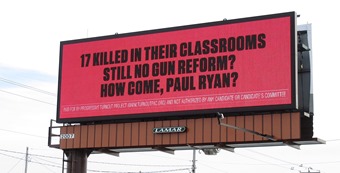 Speaking of movies, Adam Epstein observes that full-sentence movie titles like I Think We’re Alone Now were a distinct trend at this year’s Sundance Film Festival. There’s a parallel trend in New York theater: America Is Hard to See, He Brought Her Heart Back in a Box, I Was Most Alive with You. (Via Anthony Shore).

Learn how to speak Republican. pic.twitter.com/FLXI1aVI51

“Societally, we’ve reached peak logo outrage,” writes Mark Wilson in FastCo Design. “And we could all use a better pastime.”

This was news to me: the racist roots of the word bulldozer, by John Kelly for Oxford Dictionaries blog.

Copy that: Xerox is being folded into the Japanese company Fujifilm in a $6.1 billion deal. Xerox was founded in 1906 in Rochester, New York – also the home of Kodak – as the Haloid Photocopier Company; it became the Xerox Corporation in 1961. Haloid coined xerography to describe its dry-copying process from the Greek roots meaning dry and writing.

Are we running out of trademarks? Two NYU  statistics professors crunch the numbers and come up with a tentative “yes.” Also see this Language Log summary. On the other hand, I’m not a statistician or a trademark lawyer, but I have a good track record of coming up with legally available names for my clients.

The BELLINI cocktail was apparently so called because its pale orange colour reminded its inventor, Giuseppe Cipriani, of a similar colour often used the work of Venetian artist Giovanni Bellini. pic.twitter.com/dkfCd1jsi1

A logline is a brief, compelling distillation of a movie or TV – a “one or two sentence idea becomes the catalyst for every step in the process of development, pitching, producing, and ultimately marketing to the viewers and audiences.” TVWritersVault gives examples of effective loglines and tips for writing them.

Know the difference between whiskering and a cowboy crease? Madewell’s denim dictionary promises to turn you into a “jean-ius.”