One X at a time, again

Groundhog Day seems like an appropriate occasion to talk about “One X at a time,” the sloganclone that, like Punxsutawney Phil, keeps popping up. Year after year I point with alarm. And yet the formula thrives, in sunshine and shadow, in winter, spring, summer, and fall. I feel like such a failure.

If I had to identify the source of all this at-a-timing, I might single out “One Day at a Time,” the Norman Lear sitcom that enjoyed a robust run on network TV (1975–1984) and which last year was revived, with substantial changes – chief among them a Cuban-American family at the center of the action – for Netflix. The second season arrived last week, and a third-season renewal was announced on January 30. 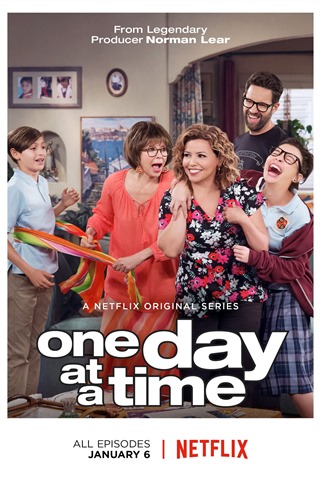 Also on January 30, I walked by the Flying Falafel restaurant on Shattuck Avenue in Berkeley and observed this slogan. 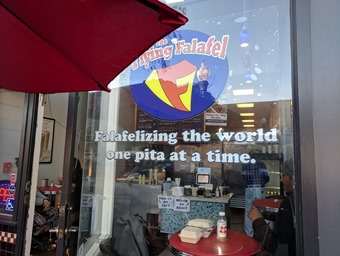 “Falafelizing the world one pita at a time.” Points, I guess, for verbing falafel, which to my knowledge no one else has attempted to do.

The nonprofit Make-A-Wish America has a new logo (reviewed by Brand New) and a new ad campaign to accompany it. 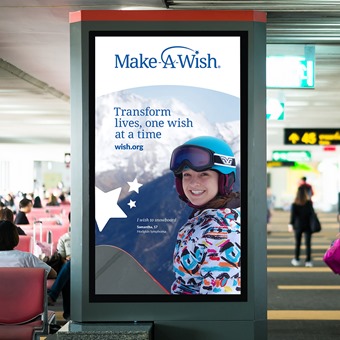 “Transform lives, one wish at a time” isn’t just lazy, it’s illogical, in my estimation. It’s always less than desirable to repeat your name (or part of your name) in your tagline. And it isn’t the wish that transforms a life: it’s money, determination, and effort.

Last weekend I saw someone wearing a T-shirt with the slogan “one film at a time,” but I couldn’t get a photo and now can’t remember what the cause or festival was. While searching for it, I found this instead, from an organization I’d never heard of: Menstrupedia, in Gujarat, India. 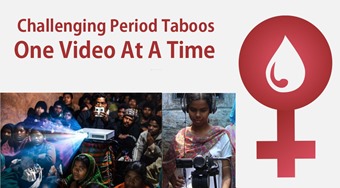 “Challenging Period Taboos One Video At A Time.”

Menstrupedia’s “friendly guide to healthy periods” is a worthy endeavor in a part of the world that badly needs it. I wish the slogan were less of a cliché (and the name less academic-sounding than “Menstrupedia”), but it seems mean-spirited to object. I give up. Go ahead and at-a-time us, Menstrupedia, and keep doing your good work.

Posted at 06:00 AM in Advertising, Nonprofit, One X at a Time, Sloganclones, Slogans and Taglines, Television, Trends | Permalink

Thanks, Nancy, for (again) alerting us to a phrase that long ago passed into cliche-hood -- a fact to which many marketers seem oblivious.

My aging memory is pretty sure the "one x at a time" formulation precedes the TV show. I associate it with the flower-power era, although, alas, I can't find any proof to justify my saying that. Interestingly, if you Google "changing the world one," it quickly fills in "...life at a time" and returns A LOT of results. That, as I recall, was the original version of the formulation -- although, again, I can't prove it.

I think the saying “one day at a time” was spread by Alcoholics Anonymous more than by the tv/ Netflix shows. Using it in advertising actually fits well with the organization’s usage of focusing on this one ‘x’ in front of you now in order to reach a goal/state of being.

I think the phrase may have its origins in Alcoholics Anonymous. One Day at a Time was a somewhat popular bumper sticker in the '70s, and I my mother (I was in jr high school) explained the AA meaning. When the show started, I assumed the mom character was in recovery.

As a marketing or branding device, “One X at a time” will never die. As you've pointed out, neither will “’Tis the season.”
Here's a partial list of my unrelentables:
• Some variant of "X. Because you want an A that…" ("X. Because an A should never…,")
• Some variant of "X, the A that puts it all together" with the inevitable jigsaw puzzle visual.
• Some variant of "There's only one thing that works better than X for your…," with an unexpected, ironic, but maybe literally correct visual.

I loved it and many have even said that it's way better than the original.﻿