“I hope this is a moment of reckoning,” the writer Peggy Orenstein – whose most recent book is titled Girls and Sex – told Salon.com last weekend in a Q&A about the recent allegations and revelations. Yes indeed, it’s “a moment of reckoning,” Rep. Ted Deutch, Democrat of Florida, told CNN over the weekend, responding to revelations that Senator Al Franken, Democrat of Minnesota, had behaved inappropriately with a woman on a 2006 USO tour. “Will Hollywood’s sexual-misconduct reckoning result in lasting change?” CNN asked, rhetorically, in late October. “I will not waste this reckoning,” the New Republic’s former literary editor, Leon Wieseltier, said in a statement in which he also complimented the “smart and good” women he’d harassed.

Sometimes the reckoning is personal, as in Rebecca Traister’s essay for The Cut. Women’s wrath “may be fierce,” she writes, “but it is not uncomplicated.” 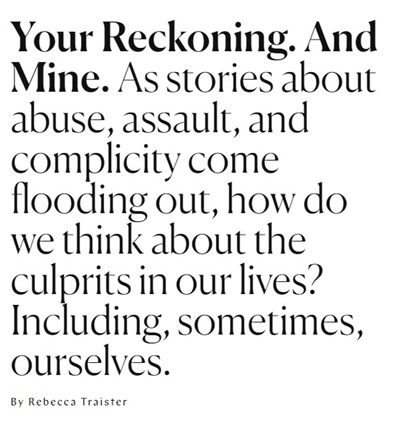 The controversy has prompted its share of whataboutism, too. What about, say, the 42nd president? In an article in TheAtlantic.com, Caitlin Flanagan writes: “The Democratic Party needs to make its own reckoning of the way it protected Bill Clinton.”

Nor is latter-day reckoning reserved for sexual malefactors.

.@HouseGOP @SenateGOP and ANYONE up for re-election who has enabled this administration, your day of reckoning is coming. #WeThePeople #DayOfReckoning #TheResistanceVOTES #ResistaneUnited #FBR #RESIST pic.twitter.com/gtrtnqUl8j

“The reckoning of the alt-right on Twitter has begun,” reads a Mashable headline. The new film Mudbound is “a critical reckoning for everyone,” declares a grandly vague Elle.com headline. The research firm Forrester predicts that 2018 will be “a year of reckoning” for corporate America.

And not just corporate America, either. Search “Trump” and “reckoning” and you find hundreds of stories such as Graydon Carter’s column for Vanity Fair: “The Reckoning: How Trump Has Left the World in Revulsion.” Or the Washington Post op-ed “A Year into Trump’s Presidency, Christians Are Facing a Spiritual Reckoning.” Or this New York Times analysis piece: “Promise the Moon? Easy for Trump. But Now Comes the Reckoning.”

Given all this reckoning we Dems are doing, the “penance” seems obvious - we have to nominate a woman in 2020. Right?

If you detect a tinge of portentousness and even piety in reckoning, that’s because its very earliest origins are religious. The verb to reckon goes back to Old English, and reckoning has been in print since the early 14th century, when one of its primary meanings was “the action or an act of accounting to God after death for (one’s) conduct in life,” according to the OED. “Reckoning” is a synonym for the Last Judgment.

To reckon also means “to count” or “add up”; the word shares a root with right and correct and with personal names such as Reynold and Reginald. (But not with the slang term rekt, which means wrecked.) The nautical term dead reckoning has been used since the 1600s to signify an estimate of a ship’s position from the distance run by the log and the courses steered by the compass, but without astronomical observations. (“Dead” here means “utmost” or “absolute.”) The colloquial sense of “reckon” – associated in the U.S. with backwoods types, cowboys, Southerners, and their Hollywood incarnations – “was regarded as provincial or vulgar,” says the Online Etymology Dictionary. “I reckon so” is Clint Eastwood’s catchphrase in the 1976 film The Outlaw Josey Wales.

Our current reckonings are rightly serious. But I was happy to see a recent reckoning in a non-serious context that fits nicely with my Twitter avatar.

Nancy and Sluggo's reckoning with the inescapable monotony of adulthood. pic.twitter.com/aeB38MHvL1

Posted at 06:30 AM in Current Affairs, Media, Men, Women, Word of the Week | Permalink