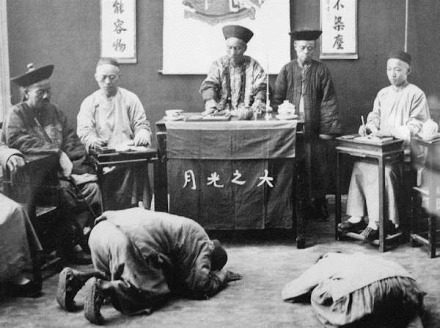 Kowtow first appeared in an English-language document (as “koo-too, or ceremony of prostration and genuflexion”) in 1804; its use rose steeply in the early 20th century and has remained more or less level since World War II. The verb form is documented as early as 1826, when it had already acquired a figurative sense: “to act in an obsequious manner.”

There is a verb that describes what Trump is doing in China: Kowtow see attached pic.twitter.com/WdDa8skvDX

The action of POTUS has a name: kowtow. Chinese emperors demanded it; Xi demands it now; Trump complies. Uniquely SAD!

#Trump is on his #China kowtow tour. He said China raped our country. Now he's on his apology tour.
"I don't blame China"#TrumpChina @realDonaldTrump is a total #flipflop and a chicken.

In English, at least, kowtow has only negative associations. The Oxford American Writer’s Thesaurus, second edition (2008), gives the following synonyms for the figurative sense of “kowtow to [someone]”: grovel to, be obsequious to, be servile to, be sycophantic to, fawn over/on, cringe to, bow and scrape to, toady to, truckle to, abase oneself before, humble oneself to, curry favor with, dance attendance on, ingratiate oneself with, suck up to, kiss up to, brown-nose, lick someone’s boots.

And those are only the polite terms. This is not a word with a positive spin.

Which is why I was surprised to discover the clothing brand Kowtow, which was founded in New Zealand in 2007. The company designs and manufacture clothes made from “sustainably and ethically sourced materials”; its creations are carried by stockists around the world, including in the U.S. and Canada. I emailed the company to find out why they’d chosen the name, and I received this response:

Kowtow is a Chinese word that represents the custom of deep respect, and this is a value that resonates deeply with our brand.

This is a mistaken interpretation, I’m sorry to say. Kowtow isn’t about mutual respect between equals; it’s about one party choosing to be demeaned or belittled in front of a more powerful party. It’s use in world affairs is, alas, fitting; in retail it’s off the mark.

Posted at 06:30 AM in Chinese, Current Affairs, Naming, Retail, Word of the Week | Permalink