« On the Visual Thesaurus: Thats ridiculous (in a good way) | Main | Word of the week: Kowtow »

You start a company to sell protective eyewear for computer users. What to name the business? Something to do with the quality of sight? Or screens? Or protection?

Now, I won’t deny that Phonetic Computer Eyewear is a distinctive name in its field, but only because it’s so utterly misleading. Phonetic means “representing vocal sounds”; a phonetician is a linguist who specializes in the study of speech. Nothing at all to do with eyesight, sharp or blurry.

Which explains why Jennifer Nycz, a linguistics professor at Georgetown University, was puzzled.

Wait-why “phonetic”? why a schwa logo? do they hope the coolness/hipness of phoneticians will transfer 2 the brand? https://t.co/VGIxSjRXZg

I myself struggled with these questions, trying my hardest to give Phonetic Computer Eyewear the benefit of the doubt. Maybe, I speculated, they’re sneaking in the concept of smartphone screens, which emit the same damaging blue light as desktop monitors.

Raquel Espa, a linguistics student at NYU, tracked down the company on Facebook and asked some direct questions. She got cheerful (and awkwardly composed) answers. This is what we in the branding business call a lame story, not least because Alpha, Bravo, and Charlie are not in any way associated with the International Phonetic Alphabet (IPA). They’re part of the NATO Phonetic Alphabet. 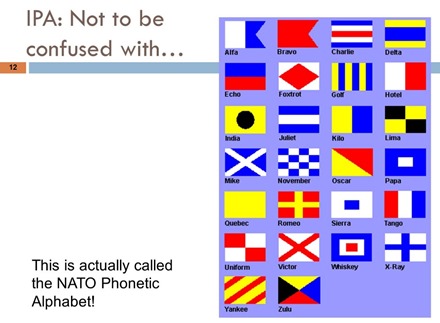 If they’d wanted to name their frame styles after the IPA, they’d have used terms like Fricative and Plosive. One of the IPA charts. For the others, see this website.

As for the schwa symbol, it’s not just a cute upside-down e. It signifies a specific vowel sound, usually called “neutral” or “unstressed.” It’s the most common vowel sound in English; we hear it in the a in about, the o in memory, and many other words. The word comes from Hebrew shva, which means “emptiness”; the spelling comes from German.

Phonetic Computer Eyewear isn’t the only brand entranced with the schwa. While researching this post I discovered a Chicago restaurant called Schwa. The name is not explained on the website, but Ben Zimmer quickly supplied a 2005 Chicago Tribune story about the restaurant’s opening that solved the riddle: the chef/proprietor, Michael Carlson, wanted to suggest an “unstressed” style of cooking.

Posted at 06:30 AM in Linguistics, Naming, What Does It Mean? | Permalink