The pink “pussyhat” – the icon of January’s Women’s Marches – has been named the first-ever Brand of the Year by the Masters in Branding program at the School of Visual Arts in New York City. 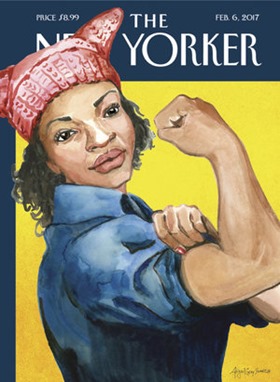 Essays by Masha Gessen, the double émigré – from the USSR and Russia – who is an authority on authoritarianism, have been required reading during the last year. In a smartly produced short video, Gessen talks about how words and their meaning are under assault by strongmen like Vladimir Putin and would-be strongmen like Donald Trump. More from Gessen in an interview with The Atlantic’s editor-in-chief, Jeffrey Goldberg: Trump, says Gessen, “has an incredible instinct for assimilating words and phrases from the liberal discourse and making them mean their opposite—’safe space,’ ‘witch hunt,’ ‘fake news.’ But he also just creates word salad. So he talks and you don't even know where the punctuation marks fall.”

On the AV Club’s Pop Lexicon blog, lexicographer Kory Stamper (author of Word by Word) talks about how two words invented by “The Simpsons” writers in 1996, embiggen and cromulent, became part of our modern lexicon.

“Cranberries have nothing to do with the sea, but Ocean Spray’s founder believed the name would evoke the mists and freshness of his cranberry bog.” How one brand became ubiquitous on American holiday tables.

John Kelly asks (and answers): How did we lose the lorn in forlorn?

In the beginning there was Boaty McBoatface, which begat Trainy McTrainface, Ferry McFerryface, and Schoolie McSchoolface. Is there a McEnd in sight? (Related: my Names of the Year roundup for 2016. Scroll down for the Boaty McBoatface story.)

Why do we say clarity instead of clearness and drove instead of drived? An evolutionary biologist investigates language evolution.

Company and product names that were inspired by nursery rhymes.

From inboxing to thought showers: how business bullshit took over. An excerpt from the new book Business Bullshit, by André Spicer.

Maybe they cut your hair. Maybe you pay them. pic.twitter.com/Z9rD7l6Rxb

Sammelband, bitrot, wimmelbilderbuch, and other terms from the lexicon of libraries and archives. (H/t Lisa Yannucci.)

Long read: Helen Rosner on the eternal verities of Olive Garden, including the absence of actual olives.

How to say “mansplaining” in 33 non-English languages. (H/t The Allusionist)

Lawyers for Montreal-based BeaverTails, which sells pastries, poutine, and other foods, told Calgary food blogger Julie Van Rosendaal she couldn’t call her homemade pastry “Beaver Tails,” because the name is a corporate trademark. So she changed the name to Beaver Doughnuts. Too close for comfort, said the lawyers. So she changed it again, to Canadian Semiaquatic Rodent Posterior Doughnuts. A social-media flap ensued, and within days the company apologized. Van Rosendaal says she may keep the Semiaquatic Rodent Posterior name anyway: “I kind of like the new name.” (H/t Matthew Hintz.) 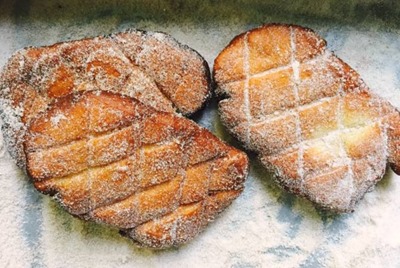 Long, interesting read on the business of branding cities, regions, and nations, especially in the former Soviet Union. “Most nation-branding strategies fail, and they fail miserably,” says one nation-branding expert. “They fail because, mainly, governments don’t have the capabilities to manage these strategies.” (Via Brand New.)