Vespertine, which opened in July, is the brainchild of chef Jordan Kahn, whose previous venture was called Destroyer. Vespertine continues the theme, calling itself “a gastronomical experiment seeking to disrupt the course of the modern restaurant.” The press release issued at the restaurant’s opening said Vespertine is “a place of cognitive dissonance that defies categorization, exploring a dimension of cuisine that is neither rooted in tradition nor culture — it is from a time that is yet to be, and a place that does not exist. It is a spirit that exists between worlds. A place of shadows and whispers.” The website’s About page is called “A Reverie.” A statement elsewhere on the site declaims, in all caps:

OUR INTENTION IS TO EXPLORE THE ABSTRACTION AND INTERRELATIONSHIPS OF MATERIALS AND IDEAS, ENVIRONMENT AND CONTEXT, OF SOUND AND DISSONANCE. A CONCEPT WHERE DELICIOUSNESS IS DRIVEN BY FORM AND TEXTURE IS CRAFTED INTO SCULPTURE

I couldn’t find anything as mundane as a logo, a menu, or a price on the website, but the reservation website – which has the delightful name Tocktix – reveals that the fixed price of the tasting menu (aka “a dinner experience in four acts”) is $250, prepaid, tax and tip not included.*

The Los Angeles Times’s Jonathan Gold, who is better known to some of us as an advocate for cheap ethnic eats, anointed Vespertine L.A.’s top restaurant, and then wrote a Q&A defending his choice. The New York Times’s Pete Wells couldn’t make up his mind enough to give Vespertine a starred review, preferring to publish his initial impressions, which included: “Some courses were almost inviting. Others seemed determined not to be eaten at all.” Customer reviews on Yelp have been, predictably, mixed, ranging from “an amazing and unforgettable experience” to “mostly ice cubes and heavy cream with ashes” and “borderline repulsive.” One reviewer, Aidan R. from Marina del Rey, was moved to coin a new word, “exactified,” which he defined as “An experience of optimum potential execution at the exact right time in our expanding universe, sitting within our multiverse, just inside of our omniverse acting out its highly diverse functions and completing its myriad tasks.”

What’s more, Aidan R. continued, “The valet is complimentary.” He was referring to the parking.

Vespertine is also the name of the fourth solo album by the Icelandic musician Björk. It was released in August 2001. 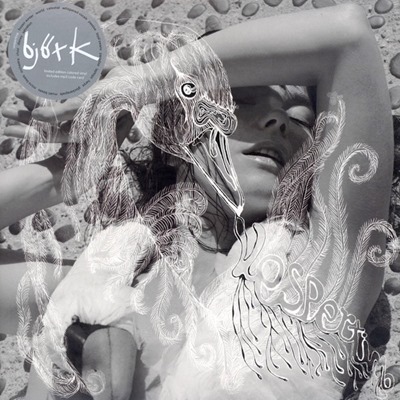 Vespertine’s cover art features a drawing of a swan superimposed on a photograph of Bjork. A few months before the album’s release, Bjork had caused a stir by wearing a swan dress to the Academy Awards ceremony.

* This is far from a record-shattering price. According to a story that appeared last week in the San Francisco Chronicle, eight of the Bay Area’s ten four-star restaurants charge at least $250 for a tasting menu; the Restaurant at Meadowood – an expensive resort in the Napa Valley – charges $500 for a 20-course meal served “at the chef’s counter.”

Posted at 06:30 AM in Latin, Music, Names in the News, Naming, Restaurants, They Said WHAT???, Word of the Week | Permalink

I'd just like a nice meal, please. Hold the dissonance.

A heavy price to pay for a crepuscular repast, I daresay.