The best of the bunch was also the first one I saw: Gelatiamo, on Third and Union in Seattle. 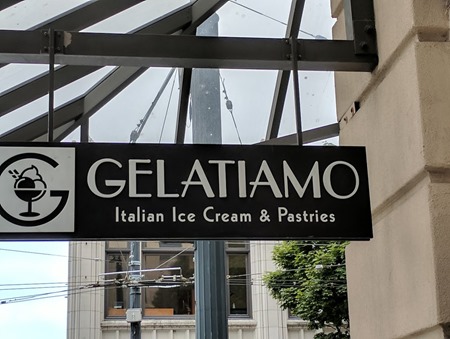 This name approaches perfection: a blend of gelato (or the plural, gelati) and ti amo (“I love you”) that rolls deliciously off the tongue. Bravissimo! 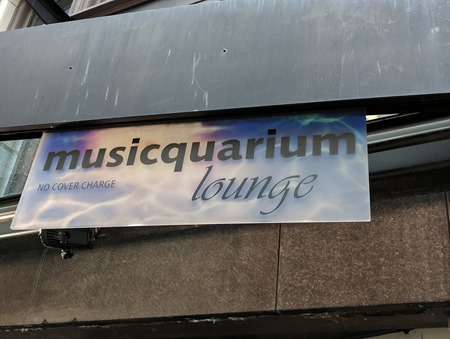 I’d like “Musicquarium” a lot more without the C, which doesn’t aid punctuation or meaning; it just sits there. Maybe they were worried about running afoul of Stevie Wonder, who released a compilation album called “Stevie Wonder’s Original Musiquarium I” in 1982.

Even less successful, linguistically, is “Apartels.” 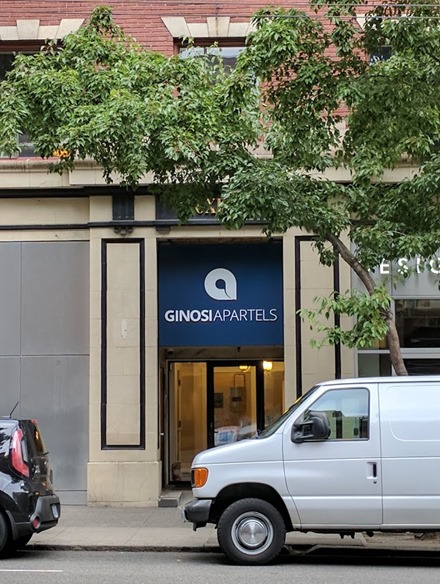 I’d never heard of Ginosi Apartels until I saw this sign on First Avenue, near the Pike Place Market, but it turns out to be an international company based in Yerevan, Armenia (!). There’s even an Apartel – or apartel; capitalization is lax – in Oakland, where I live. The website calls Oakland “the hipper side of the bay,” not far from “the Golden Gates Bridge.” Sic and ouch.

Apartel is a blend of apartment and hotel, but the mixture doesn’t quite gel. The problem lies in the dueling stress patterns: in apartment, the stress falls on part, whereas we stress the tel in hotel. So is it “a-PART-el” or “a-par-TEL”? Impossible to say.

Ginosi feels strongly enough about Apartel to have filed a U.S. trademark registration for it earlier this year. (The company was originally called Ginosi Apartments.) Here’s how the website explains the name:

‘Apartel’ is a new word for most people. The word itself refers to hotels that feature fully furnished apartments. For our guests, an Apartel is not only the blending of two words, but the combination of two good products to create something great.

There’s no explanation of the “Ginosi” part of the name, except a hint in this corporate blog post that it’s an Armenian word. (The founder’s name is Amoor Avakian.)

Apartel doesn’t thrill me, but a portmanteau brand name I spotted in Vancouver made me cringe. 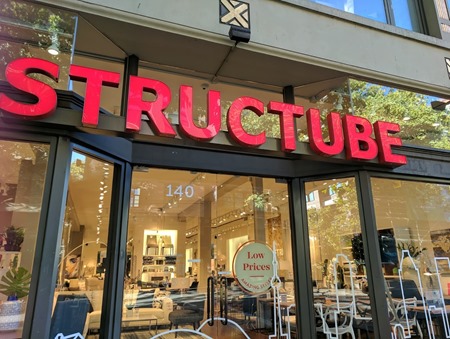 Structube sells moderately priced furniture and home décor; its closest U.S. equivalent might be West Elm or Crate & Barrel. According to the website:

It all began in 1974 with a single store on the corner of Sherbrooke Street and Park Avenue, in Montreal. Over the years, this family business has evolved into a thriving retail operation. With over 55 retail locations and 450 employees, Structube is now the leading retailer of contemporary and modern home furniture in Canada.

Clearly, this is a case of Despite the Name, because while Structube is a “thriving retail operation,” its name is awful. For starters, the pronunciation is awkward. As for what the name’s components evoke, I can’t imagine a universe in which structure plus tube equals “contemporary,” “modern,” “home,” or “furniture.” (OK, a home is a structure. But still. Do all the sofas roll up into tubes? I’m stumped.)

Structube is the last place I’d expect to find something comfortable to sit, lie, or prop my feet on. Then again, another Canadian brand, Teenflo, lasted 35 years despite its misleading and faintly ridiculous name. So could this be a Canadian phenomenon? I’m a stranger there myself; you tell me.

Posted at 06:30 AM in Canadian, In the Wild, Italian, Naming, Portmanteaus, Trademark | Permalink

Structube pronunciation is more elegant in French, though that doesn't really help the meaning issue.

Gelatiamo works well, even for Italophones. It sounds like an Italian pop song!

Apartel also works better in French than in English.