Word of the week: Spoonie

I’ve followed Tinu Abayomi-Paul on Twitter for years, but I only recently noticed that her profile included the hashtag #spoonie, a term unfamiliar to me. 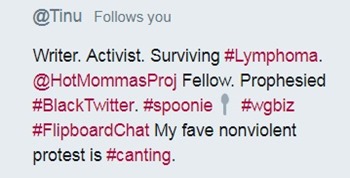 So I did a little research.

Spoonie is only tangentially related to the verb to spoon – to court or woo, especially in a silly or sentimental fashion. That usage dates back to the 1830s; the Online Etymology Dictionary connects it to spoony, an adjective meaning “foolishly sentimental” that’s attested from 1813, “perhaps based on the notion of shallowness,” as exemplified by the eating utensil.

Spoonie is more directly connected to the noun spoon, which comes from Old English spon (a chip or sliver of wood) and which began referring to a rounded eating utensil around 1300. 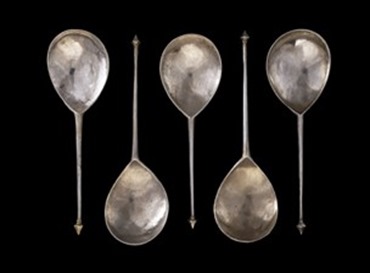 In 2003, the blogger Christine Miserandino – her real name – published a post in her blog, “But You Don’t Look Sick,” about what it was like to live with lupus, a chronic autoimmune disease. She titled the post “The Spoon Theory,” and its argument is an extended metaphor she used in a conversation with a friend:

I explained that the difference in being sick and being healthy is having to make choices or to consciously think about things when the rest of the world doesn’t have to. The healthy have the luxury of a life without choices, a gift most people take for granted.

Most people start the day with unlimited amount of possibilities, and energy to do whatever they desire, especially young people. For the most part, they do not need to worry about the effects of their actions. So for my explanation, I used spoons to convey this point. I wanted something for her to actually hold, for me to then take away, since most people who get sick feel a “loss” of a life they once knew. If I was in control of taking away the spoons, then she would know what it feels like to have someone or something else, in this case Lupus, being in control.

She grabbed the spoons with excitement. She didn’t understand what I was doing, but she is always up for a good time, so I guess she thought I was cracking a joke of some kind like I usually do when talking about touchy topics. Little did she know how serious I would become?

I asked her to count her spoons. She asked why, and I explained that when you are healthy you expect to have a never-ending supply of “spoons”. But when you have to now plan your day, you need to know exactly how many “spoons” you are starting with. It doesn’t guarantee that you might not lose some along the way, but at least it helps to know where you are starting. She counted out 12 spoons. She laughed and said she wanted more. I said no, and I knew right away that this little game would work, when she looked disappointed, and we hadn’t even started yet. I’ve wanted more “spoons” for years and haven’t found a way yet to get more, why should she? I also told her to always be conscious of how many she had, and not to drop them because she can never forget she has Lupus.

The theory caught on with Miserandino’s readers, who began using it to explain a wide range of chronic conditions, including fibromyalgia, rheumatoid arthritis, and Lyme disease. 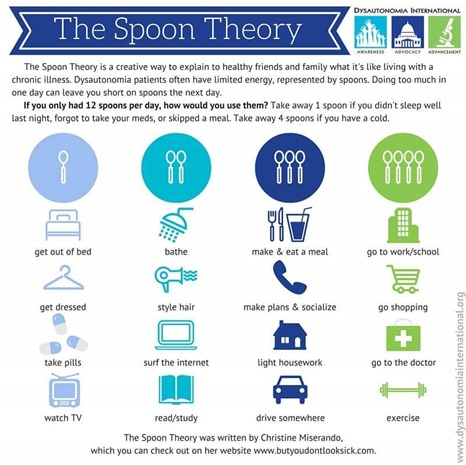 At some point, people who embraced spoon theory began referring to themselves as spoonies. (Not to be confused with Scots spoonie, a diminutive form of spoon.) The hashtag is popular on social media.

Things not to say to a #Spoonie Did you take your meds? #JedTalks pic.twitter.com/7u0kmvajTV

Bonus word of the week: Tinu’s profile also includes the hashtag #canting, which Urban Dictionary defines, awkwardly, as “A period of time where the ability to can is lost due to any given situation or circumstance. Can last from minutes to days on end.” Do you feel as though you “can’t even” cope with stuff? Then you’re #canting.

I just can't. I want to but I can't #canting

Posted at 06:36 AM in Medicine, Neologisms, Slang, Word of the Week | Permalink

If "spoonies" becomes popular, I'll be surprised. I think the spoon allegory is too contrived, non-parallel and non-intuitive to become common parlance. But I'm speaking as someone without a chronic debilitating condition.

Dan: I happen to agree; personally, I can make do just fine with one (literal) spoon. Who needs dozens? But I too am speaking as someone without a chronic debilitating condition.