« On the Visual Thesaurus: Back to backronyms | Main | Portmanteaus in the wild: Seattle and Vancouver »

Mike Pope, who recently began working at Google as a technical editor, introduces us to Google’s specialized vocabulary, including Noogler, LDAP, and GBike.

“Hurricanes need uglier names,” declares linguist Geoffrey Pullum. He suggests Anthrax, Blastocytosis, and Chlamydia, all the way down to Zygomycosis.

Speaking of hurricane names, John Kelly dug up some interesting etymology of “Irma.”

Outgoing Vanity Fair editor Graydon Carter had a little list of “tabloid-hack” words not allowed in the magazine, including eatery, boite, moniker, eschew, and scarf (verb). (Speaking of tabloid, here’s my examination of that word’s interesting history.)

‘Useful abbreviations for the time-pressed online reader’ (for @guardianreview) pic.twitter.com/Kr9dGbobrg

Every time I donate blood I’m asked whether I’ve ever contracted Babesiosis, a rare and often fatal tick-borne disease. But until recently I hadn’t known that the disease is named for Victor Babès (1854-1926), the Romanian pathologist who discovered the protozoan that causes the disease. More like this in Whonamedit?, a dictionary of medical eponyms.

The President of the United States just made up an African country while speaking to African leaders pic.twitter.com/GBY56lYP5f

“Head of Thought,” “VP of Wokeness,” and other only semi-implausible advertising titles of the near future.

Never forget: the Icelandic word for computer (tölva) combines the words for "number" and "seeress," so basically a computer = number-witch. 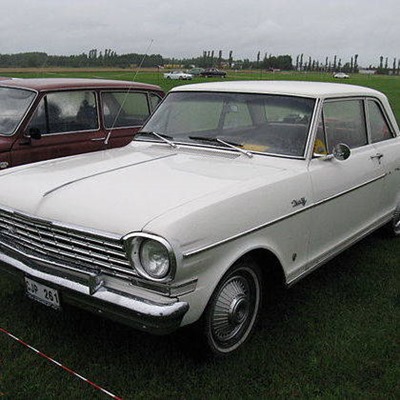 The 1964 Chevy Nova II. Despite what you may have heard, the Nova was not a failure in Spanish-speaking Latin America.

Beepi, Quixey, Yik Yak and seven other lavishly funded startups that failed in the first seven months of 2017. The TechCrunch list includes the company (and business plan) everyone loved to hate: Juicero.

A couple of items about dotard, which was in the news last week as North Korean dictator Kim Jong-un’s epithet-in-translation for Donald Trump:

Dictionary searches for dotard spiked after Kim Jong-un’s statement was made public. Merriam-Webster noted that the word meant “imbecile” when it was first used in the 14th century.