On the Visual Thesaurus: Back to backronyms

In my newest column for the Visual Thesaurus, I take a look at backronyms, defined in an Oxford Dictionaries blog post as “an acronym deliberately created to suit a particular word or words, either to create a memorable name, or as a fanciful explanation of a word’s origin.” Backronyms are rife in the names of legislation: witness the recent HONEST, COVFEFE, and MAR-A-LAGO acts. It’s a tradition that goes back to the USA PATRIOT Act of 2001, whose rah-rah title expands into “Uniting and Strengthening America by Providing Appropriate Tools Required to Intercept and Obstruct Terrorism.”

Backronym was coined (as bacronym) in 1983; examples were rare before then.

Full access to the column is available only to subscribers for three months. Here’s an excerpt:

One of the most influential backronyms in U.S. history is SWAT, which was first used by the Philadelphia Police Department in 1964 and adopted by the Los Angeles Police Department in 1967. The initials originally stood for Special Weapons Attack Team, but were modified to the slightly-less-ominous Special Weapons and Tactics. The blunt force of SWAT – whose dictionary meanings include “strike” and “punch” – inspired a television series, S.W.A.T., which aired on ABC in 1975 and 1976 and which was turned into a 2003 film and a 2017 television “reboot.”

Blog bonus! For its ongoing ad campaign for “Intelligent Advisory Services,” investment company Charles Schwab has been inventing some painfully tortured – you might even say unintelligent – backronyms. The concept of demographic backronymizing goes back to the early 1980s and “yuppie,” which originally meant “young urban professional” and was itself modeled on the Yippie Party, founded in 1967 as the Youth International Party. “Yuppie” begat dozens of offshoots, including “buppie” (black urban professional), “guppie” (gay urban professional), DINK (dual income, no kids), and many others, some more facetious than others. 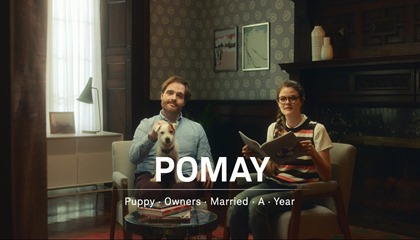 BENKS who aspire to be POBASHOOTUARS. (Which I translate as “I just can’t even.”)

Posted at 09:51 AM in Acronyms, Advertising, Politics, Visual Thesaurus | Permalink