« The case of the forbidden letters | Main | Names in the wild: Westfield San Francisco Centre food court (and beyond) »

Word of the week: Screed

On Saturday, the technology blog Motherboard reported on a document titled “Google’s Ideological Echo Chamber” that had been posted by an unnamed male software engineer on a company mailing list and had subsequently gone “internally viral.” By the end of the day, another tech blog, Gizmodo, had published the complete 3,400-word text of the document, still without revealing the identity of the author.

The substance of the document, which criticizes Google’s affirmative-action programs for their anti-conservative bias while asserting that “I strongly believe in gender and racial diversity,” reveals a certain (possibly prevalent) mindset among a certain (possibly large) segment of the tech industry. It drew sharp responses from other tech-industry observers – see, for example, this piece by Ian Bogost for TheAtlantic.com and this one by Yonatan Zunger on Medium– and from Google’s own vice president for diversity, integrity, and governance Danielle Brown. 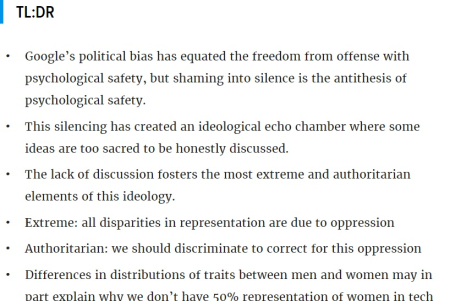 An excerpt from the Google email.

But I’m not here to analyze the arguments. I’m here to ask: What should we call the document?

The Motherboard headline, and the ones in TechCrunch and USA Today, call it a manifesto. The Guardian calls it a “manifesto,” in quotes. A Quartz headline call it, blandly, a memo – and, within the story itself, a tirade. It’s also been called a polemic, a diatribe, an essay, a rant, and “garbage fire of a document.” (The conservative National Review called it “awesome.”)

But one word surfaces repeatedly: screed.

Standard dictionary definitions and etymologies don’t quite give justice to the emotional overtones of this curious old word. The OED tells us screed entered English in the early 14th century, when it meant “fragment” or “strip of cloth”; it’s related to the same Old English root that gives us shred. Around the middle of the 18th century, however, it acquired a new meaning: a long and tedious speech or piece of writing. And in the early 20th century it began taking on am even more pejorative cast: a rant, a vehement complaint, or a tirade. (Tirade, from a French root meaning “pull,” is a volley of words; rant, a 17th-century borrowing from Dutch, is an “extravagant, boisterous, or declamatory speech or utterance.” English has no shortage of words describing angry talk.)

Screed gets its pejorative charge from a couple of sources. For one thing, it sounds like scream and screech. For another, there’s an old Scottish and northern English screed that means “a loud, harsh, screeching noise as of something ripping or scraping.” It was sometimes used to describe the sound of bagpipes.

On Twitter, I asked for opinions on the difference between a screed and some other kind of opinionated writing. Here are a few responses.

Despite what dictionaries may say, "screed" is in some way pejorative. "Manifesto" is more neutral. The Google thing has a call to action.

Neal Goldfarb, a lawyer interested in linguistics, probably gets to the heart of the matter when he writes: “Different ppl have different reactions to the piece, so use different words to describe it.”

In other words, using screed betrays one kind of bias (“I hate what this guy is saying”) while manifesto betrays another (“I may not agree with what he’s saying, but at least it – like the Unabomber manifesto – follows a certain internal logic”). The memo’s argument is in fact specious and lacking in documentation (do women really have “higher anxiety and lower stress tolerance” than men, especially men in stressful jobs?), and its tone is too deceptively neutral to qualify as a diatribe (“a bitter and violent criticism; an invective”). It may best be defined as a polemic: “a controversial argument; a strong verbal or written attack on a person, opinion, or doctrine.”

I learned another word from the screed/essay/memo/polemic: Googlegeist. Apparently inspired by zeitgeist (“spirit of the time”), it’s a “lengthy annual survey of employees,” according to a 2013 article about Google written by Farhad Manjoo for Slate. In the fall of 2010, writes Manjoo, all Google employees received a 10 percent raise. “Googlers were overjoyed—many people cite that announcement as their single happiest moment at the firm, and Googlegeist numbers that year went through the roof.”

Posted at 07:35 AM in Technology, Word of the Week | Permalink

Women consistently score higher than men on the Neuroticism Big 5 trait, which he appears to be referencing, so at the population level the answer to this question is yes, I guess. I believe it’s one of the stronger results in current psychology.