« July linkfest | Main | The case of the forbidden letters »

Word of the week: Vote-a-rama

After seven years of Republican opposition to the Affordable Care Act – probably the signature legislative accomplishment of President Obama’s first term – and two failed attempts this year by the Republican-majority to repeal and replace the law, U.S. senators prepared to spend most of July 27 in a marathon of voting on amendments to a new “skinny repeal” of the ACA. The showdown they were bracing for has a name that sounds like a joke but in fact is 100 percent official: vote-a-rama.

It even had its own logo. 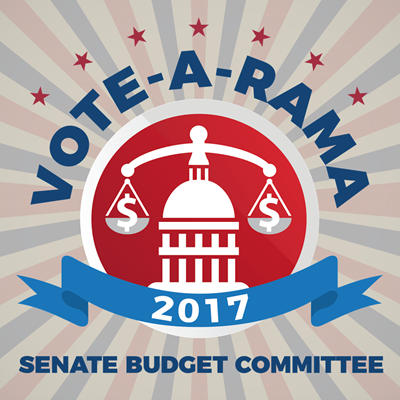 Via the official website of the U.S. Senate Committee on the Budget.

In the end, the proceedings didn’t quite add up to a vote-a-rama, which is defined as 15 or more votes on a single bill in a single day. The “skinny repeal” – officially the American Health Care Act of 2017 – was defeated, 48-52, when three Republican senators joined their Democratic colleagues in voting nay.

Vote-a-ramas have taken place since 1977 – the first one was on the Natural Gas Policy Act – but they lacked a catchy sobriquet for almost two decades. According to a May 25, 1996, UPI article, the term was coined by Senate Republican Whip Trent Lott of Mississippi, who used it to describe a nine-hour voting marathon on 27 amendments to a budget plan. It’s possible that he picked it up from Keith Hennessey, a former Senate staffer who takes personal credit for the coinage even though he didn’t join Lott’s staff until February 1997. Hennessey, who later served as the director of the U.S. National Economic Council, wrote on his blog in 2010:

I spent 7+ years as a staffer for Senate Budget Committee Chairman Pete Domenici (R-NM) and for Senate Majority (& Minority) Leader Trent Lott (R-MS). One of my few lasting contributions is the term vote-a-rama. I therefore feel obliged to provide a formal definition.

vote-a-rama: (n) an extended sequence of back-to-back votes in the United States Senate. A side effect of special rules for considering the budget resolution or a reconciliation bill, a vote-a-rama may last 10, 20, 30 hours or more, and occurs after all time for debate has expired but before a vote on final passage.

Vote-a-rama was synthesized from a familiar Greek root, horama – “sight, spectacle, that which is seen” – that has also given us panorama (from 1789; originally “a painting on a revolving cylindrical surface”), diorama (1823), and the Washington, DC, neighborhood Kalorama, which I wrote about earlier this year. The –arama spelling is usually jocular (Bananarama, boozarama, Obamarama), but a vote-a-rama is a serious matter. Perhaps to drive home the point, or perhaps because it invariably marches to the stylistic beat of a different drummer, the New Yorker prefers “so-called Vote-O-Rama.”

Posted at 06:37 AM in Politics, Word of the Week | Permalink