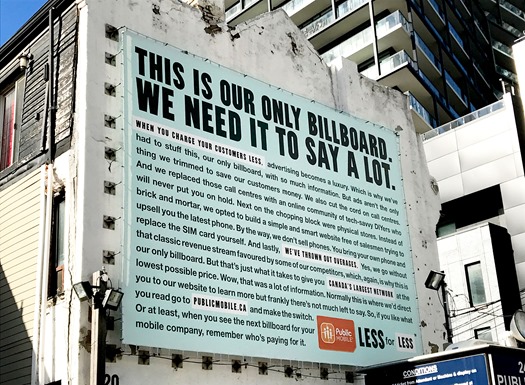 It’s hard to tell from the way the photo’s been cropped, but that ad appears to be floating at least one story above street level, which means it’s impossible to read either from a moving vehicle or from the pavement. Not that anyone would take the time to read an ad that conveys no useful information whatsoever in the headline (set in the largest type) and hides the name of the company (!) in tiny type at the very bottom of the text. (It’s in the orange block, in case you missed it.)

The ironic part? The company’s theme is “less for less”: fewer frills for less cash.

Would that they’d taken that motto to heart when they’d assigned and, incredibly, approved this waste-of-budget ad. Perhaps the copywriter faced Pascal’s dilemma: “If I’d had more time, I would have written a shorter letter.”

The copy, should you take the time to study it (I forced myself to) is, unsurprisingly, padded with words that serve no purpose other than to fill out a line: “By the way,” “And lastly,” “Wow, that was a lot of information.”

Recall that the purpose of advertising is to direct attention toward something. (That’s what the verb advert means.) This ad, and others like it*, serves a different purpose: self-congratulation. Note the “our” and the “we” in the headline, and the 13 additional times our and we appear in the copy. (Plus one you in the first sentence that’s really a we.) Public Mobile may think it’s talking about benefits to the customer, but it’s actually talking about itself. Guess what? Nobody cares.

This hot mess could have been avoided if the creative director and copywriter had followed some elementary ad guidelines:

You might also consider having your advertising and your website sing the same tune in the same key. Unlike the billboard, PublicMobile.ca is concise, clear, and well organized.

* Other examples of the Verbose, Self-Absorbed, or Just Baffling Billboard genre:

Posted at 06:30 AM in Advertising, Bad, Canadian, Telecom | Permalink

I would add that 95% of highway billboards are completely useless at 75mph. It amazes me how much information advertisers try to cram onto them. Do they expect you to pull over and stop?