Word of the week: Fidget

The fidget spinner – a handheld, two- or three-pronged gadget with a ball bearing in its center that makes the prongs go around very fast – is this year’s toy fad, popular with school-age kids and sometimes touted as a stress reliever for people of all ages. Versions are available for as little as $1, or you can spring for this $24.95 Triune Spinner, which is said to have “a high-speed Si3N4 Hybrid Ceramic Bearing that provides fast smooth easy fidgeting and long spin times that will impress your friends.” 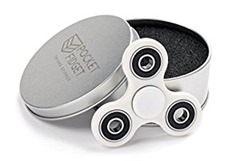 There’s even a two-pronged spinner called the Torqbar that will set you back as much as $200, not including the fancy leather carrying case.

Accounts of the fidget spinner’s invention vary as widely as the spinners themselves. But how about the word fidget – what does it mean, and where does it come from?

Fidget first appeared in English as a noun: “a condition of vague physical uneasiness, seeking relief in irregular bodily movements.” It was often pluralized, and always preceded by “the.” The OED’s earliest citation is dated 1673: “’Tis a thing that has got the fidget.” The verb – to make movements indicative of impatience, restlessness, or uneasiness; to move restlessly to and fro – appeared about 80 years later. (The late 18th century also saw fitchet pie, an English dialect term for a savory pie made with onions, apples, and bacon. It was named after the fitchet, or polecat, “apparently from the strong, unpleasant odour of the pie while being baked.” By the mid-20th century, fitchet had assimilated to fidget.)

The OED traces fidget back to the verb fidge, which had been in use since the 1570s and which meant “to move about restlessly or uneasily.” That word is, disappointingly, “of obscure origin,” although it may be related to a Scottish and Middle English word, fike, which has a similar meaning and which may in turn be related to the German verb ficken, “to move about briskly.” Ficken is a close cousin of fuck. (For more on that connection, I recommend this Strong Language post.)

I haven’t been able to verify the first use of “fidget spinner,” although there are clues in the trademark record. As early as 1999, a trademark application was filed by the Musgrave Pencil Company of Shelbyville, Tennessee, for Finger Fidgets, a “mechanical action toy”attached to a pencil. They are still being marketed as devices to relieve anxiety and restlessness, especially for children with autism. As with any fad, fidget spinners have prompted a great deal of chin-stroking and hot takes. There’s a sad story about one inventor who couldn’t afford to renew her patent – but it turns out she’s not the original inventor after all. There’s an academic paper by two engineers, published in October 2016, titled “Understanding Fidget Widgets: Exploring the Design Space of Embodied Self-Regulation.” There are warnings from “moms” about the dangers of fidget spinners for young children, mainly from choking. There’s a partial debunking by Snopes of one dangerous-fidget-spinner story. There are anthropological takes (fidget devices like worry beads are nothing new) and cultural takes (Wharton professor Jonah Berger: “People are not used to sitting and doing nothing”). There are political-philosophical takes, like this essay by writer and game designer Ian Bogost titled “The Fidget Spinner Explains the World”:

It’s a toy like a top, but spun in the hand rather than on a surface. The user holds a pad at the center, and flicks one of three rounded blades. The spinner rotates around a bearing at the center. The light weight of the device and the low friction of the bearing allows it to spin for a long time.

What is it for? The fidget spinner has been framed as just a toy—but also as a stress-relief tool, a classroom menace, a treatment for ADHD, and a possible salve to smartphone addiction, among other things.

Fidget spinners might or might not be any of those things, but at their core they are something more, and something stranger: the perfect material metaphor for everyday life in early 2017, for good and for ill. …

The same values that the fidget spinner symbolizes, like innovation and individualism, are supposed to produce a glorious future: life-extending technology, on-demand delivery, and hyperloop transit. But in truth, progress has ground to a halt. In its place: an infinite supply of gewgaws, whether apps or memes or tops. Each fashions a new itch, whose scratch offers a tiny, temporary relief that replaces broader comforts.

If you’re late to the fidget-spinner fad, take heart: According to some market indicators, the trend may have peaked several weeks ago.

Posted at 06:25 AM in Etymology, Toys, Trademark, Trends, Word of the Week | Permalink