On the Visual Thesaurus: Failure

My new column for the Visual Thesaurus – where I’ve been a contributor for 11 years – is about the shifting meaning of failure. A relatively recent addition to English, failure first appeared in the early 18th century, when it had the very specific meaning of “the act of failing in business.” It took another hundred years before a person could be called “a failure,” and the stigma of that label was damning.

No longer – at least, not in certain quarters. For tech entrepreneurs and self-improvement boosters, failure is “a stepping stone to success,” “the price you pay for progress,” and even a badge of pride.

We’re seeing this upbeat sense of failure in new idioms like failing up, failing forward, and failing fast. It’s in the titles of recently published books (The Gift of Failure) and of TED talks (“Smart Failure for a Fast-Changing World”); in brand names (Fail Chips) and in a conference for entrepreneurs (FailCon, which began in 2009); and even in a new course for Smith College overachievers called “Failing Well.” Here on the Visual Thesaurus, Daphne Gray-Grant recently wrote about “Why We Should Want to Fail as Writers” (“because mistakes show you’re pushing yourself”).

Fail Chips would be failures if they were sold by any brand other than Mailchimp, an email-newsletter service whose name is frequently mis-heard.

The new sense of failure as something to flaunt and embrace comes at least in part from the world of software engineers and product developers, for whom “Fail early, fail fast, fail often” is a mantra. (“If you’re not failing, you’re not innovating” is another way it’s often phrased.) The fail fast concept “encourages exploration by floating trial balloons quickly, then allowing ideas to fail if they don’t help drive positive business outcomes,” as a “Cloud Transformation Futurecast” puts it. “Programmers have to anticipate failure conditions in their programs. ... Engineers court failure as a way to test their systems,’” Mike Pope wrote in a 2013 Visual Thesaurus column, “When Failure Is an Option.” 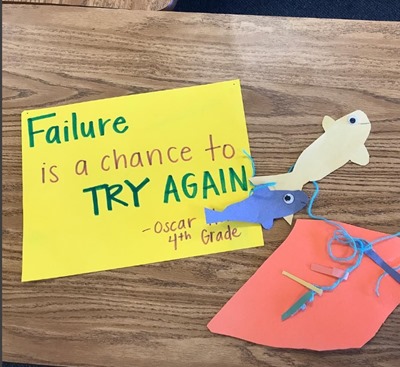 The glass-half-full view of failure starts early. Via Erin Dealey on Instagram.

Blog bonus #2: One of my favorite examples of the New Failure is Fuckup Nights, “a global movement born in Mexico in 2012 to share publicly business failure stories.” This flyer appeared in Sheffield (UK); I particularly like the fucked-up kerning in the Fuckup wordmark. 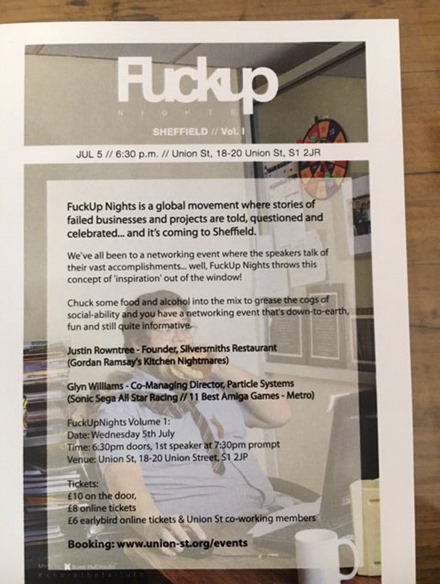 “We’ve all been to a networking event where the speakers of their vast accomplishments … well, FuckUp Nights throws this concept of ‘inspiration’ out of the window!”

Posted at 06:10 AM in Trends, Visual Thesaurus, Words | Permalink