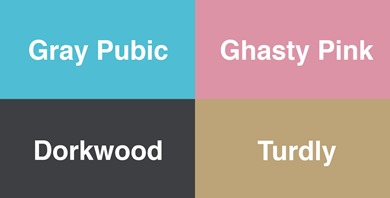 Thrilled to announce Scottish candy has the names you imagined it did. pic.twitter.com/RhVVz6mT2q

Feeling powerless in the face of current events and shady administrations? George Lakoff, the doyen of linguistic framing, has a suggestion: “Name the major disasters after the person most responsible for perpetuating and causing new ones in the future. When sea levels rise floods Florida, or when atmospheric heating produces massive evaporation over the Pacific that blows north and east resulting in huge floods throughout the Midwest, name them Trump flood disasters. When continued atmospheric heating systemically leads to massive fires in Texas, name them Trump fire disasters.” (Hat tip: Anthony Shore.)

You’ve probably heard about all the things the Millennial generation has been accused of killing. Brianna Wu, Congressional candidate from Massachusetts, thinks it’s time to invoke the power of naming.

Millennials have destroyed Applebees, paper towels, department stores and diamonds. What should this all-powerful generation be called?

A list of movie taglines that begin with “Sometimes…” (Paul Ford)

If only certain other elections were as easily overturned by experts as the Name of the Year contest, in which the voting public chose Boats Botes. The NOTY committee deemed it “a wildly inferior name” and offered up its own winner: Kobe Buffalomeat, a 6-foot-7, 285-pound offensive lineman who will be playing for Illinois State in the fall. “Sure, you could argue that ‘Kobe Buffalomeat’ is a little on the nose onomastically,” the NOTY blog allowed. “But it’s a glorious name regardless: Kobe because his mom, Paula, liked the name of then-third-year Lakers guard Kobe Bryant; Buffalomeat from the Cheyenne Arapaho tribe in Oklahoma in the lineage of his father, Ray. Kobe is a kind of meat. Buffalomeat is a kind of meat. As we say at NOTY, Kobe Buffalomeat has it going both ways.”

Someone is finally making Trump toilet paper. In a stroke of poetic justice, that someone is in Mexico. 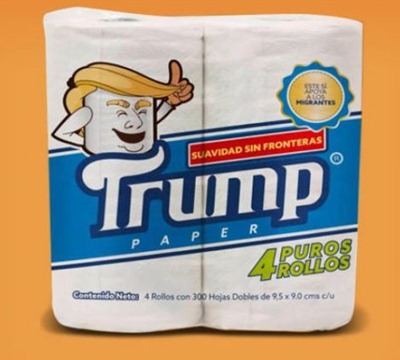 In advertising, being “different” is not enough, writes Mark Duffy, the Copyranter.

@Douchebagstrat is a bot that tweets random marketing jargon so you don't have to.

It's not about post-gamified curation, it's about conversational content amplification

Yes, you can register a weak trademark. But registration doesn’t make it stronger. Here’s a really clear explanation, with lots of examples, from trademark lawyer Rick Sanders. An excerpt:

The truth is creating strong trademarks takes hard work and a creative eye. “Suggestive” marks are the best balance of pre-existing meaning and strength, at least in the near term, but they must be selected with care. You need a poetic ear, and it’s easy to choose one that’s too descriptive. Long-term, fanciful and arbitrary marks have the most upside, but it still takes some thought to come up with good ones.There’s a wide gulf between KODAK (for cameras) and, say, GURGLAMPH. Or between APPLE for computers and, say, BANANA JR.

Posted at 06:15 AM in Advertising, Branding, Colors, Film, Linkfest, Name of the Year, Naming, Politics, Slogans and Taglines, Trademark | Permalink