And what is nutritional yeast? Here’s a definition and description from the Eat This, Not That! website:

We’ll get right to it: This Nooch we speak of is actually just the street name for nutritional yeast, a.k.a. a yeast grown on molasses and harvested and dried with heat to deactivate it (so don’t go trying to make bread with it). The recent uprise [sic] in trendy, plant-based diets has led to the current stardom for this staple health food ingredient. With an umami flavor profile, nooch brings both savory and salty flavors to foods that are mild in taste. It resembles a nutty, cheesy taste that’s similar to parmesan and comes in flakey and powdery forms that makes it easy to sprinkle on pretty much anything. 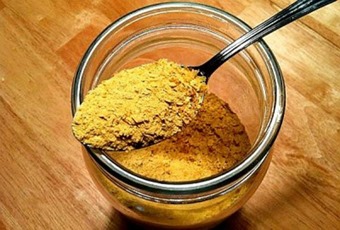 Nutritional yeast, aka nooch, via One Green Planet: “The first rule of Nooch Club is that you don’t talk about Nooch Club.”

There’s a Nooch Vegan Market in Denver, which went the branding-by-definition route for some of its, um, merch, and which sponsored a vegan prom on May 13. 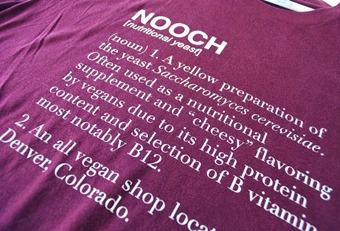 Nutritional (or deactivated) yeast has been available for a long time; it’s a principal ingredient of Vegemite, among other products. It’s known as savoury yeast flakes in Australia, and is sold under the brand name Brufax in New Zealand even though – contrary to the implications of the name –  it’s a different product than brewer’s yeast. In the U.S., according to a Wikipedia entry – this was all news to me – it has been called “hippie dust” or “yeshi” (a word of purportedly Ethiopian origin). The source and timing of the nooch abbreviation are uncertain; the earliest Urban Dictionary entry, from 2007, attributes the coinage to PPK (“Post Punk Kitchen”), a vegan cooking show created by Isa Chandra Moskowitz that aired on public-access TV in New York from 2003 and 2005. The show is gone, but the PPK Forum lives on, and it has 126 posts dedicated to “Noochy, Noochilious Nooch!” The oldest post in the forum is from 2010, and I haven’t been able to find any earlier citations.

Nooch fits comfortably into a word-truncation trend with a surprisngly long history. I’ve already mentioned merch (“merchandise”); not long ago I spotted purch (“purchase”) in a tweet from the cable channel Nickolodeon. I wrote in 2012 about brand language that followed this trend: Presh, Delish, FashTrack, and “so profresh.” There’s also the Rachael Ray pet-food brand Nutrish. Such abbreviations were also in fash, as it were, in the 1920s, possibly spurred by Variety slanguage such as spesh (special) and competish (competition). Robert Lane Greene, writing in 2012 for The Economist’s language blog, Johnson, observed that words like these – as well as ledge (legend), cazh (casual), and the ushe (the usual) – involve “a stop-consonant (one that blocks the airflow)” transitioning “to a fricative (which merely slows it down).” He concluded: “Cutting those words off at those mutated sounds is fun.”

One more note on nooch: In my noodling around, I found a brand-name Nooch that seems to have nothing to do with nutrition. (I can’t say for sure, because I couldn’t find any explanation of the name, and the company’s Twitter account has been dormant for seven months.) This Nooch is a peer-to-peer payment system; it was founded in Philadelphia in 2014 by a 26-year-old Duke graduate named Cliff Canan. Maybe he just thought the name was fun.

Posted at 06:30 AM in Abbreviations, Banking, Food and Drink, Naming, Retail, Word of the Week | Permalink

I've edited a bazillion vegan cookbooks over the years (including one by Moskowitz) but can't remember when I first saw "nooch"—I'll check the indexes and get back to you....