Word of the week: Gaggle

When is a press briefing not a briefing? When it’s a gaggle, sometimes held en route to somewhere, sometimes in the James Brady Press Briefing Room, sometimes excluding the biggest media outlets in the U.S. 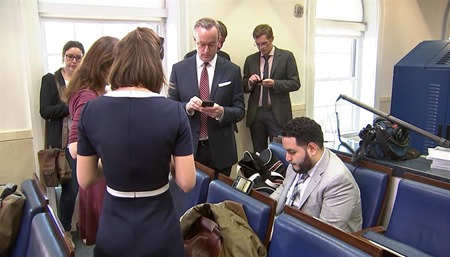 A Wikipedia entry defines press gaggle as an informal press briefing by the White House press secretary (or, presumably, someone serving in a similar capacity) that’s on the record but disallows videography. The veteran White House reporter Helen Thomas (1921–2013) attributed the coinage to Dee Dee Myers, who was President Bill Clinton’s press secretary in 1993–1994.

Kevin Drum, a former political reporter for Washington Monthly (he’s now at Mother Jones) wrote in January 2003, during the George W. Bush administration, that “sometimes the White House holds ‘press briefings’ and sometimes it holds ‘press gaggles.’ What’s the difference?” The answer came from “an email from an ‘ex-White House grunt’”:

“Gaggles” historically refer to informal briefings the press secretary conducts with the press pool rather than the entire press corps. They used to happen in the morning, they were more or less off the record, and their purpose was mostly to exchange information – the president’s schedule and briefing schedule, from the administration side; heads-up on likely topics or early comment on pressing issues, from the news side. Briefings were what everybody knows them to be.

In previous administrations, when the President traveled, sometimes the press secretary would hold a gaggle with the press pool that travels on Air Force One – not every time, but sometimes, and always informally. In this administration, Ari does a gaggle on the plane every time the President goes out of town, and a transcript is made available for press corps members who weren’t on the plane. These mid-air mini-briefings are the “gaggles” you can find transcripts of on the White House website.

The reference is, of course, to a gaggle of geese, which the OED tells us is “one of the many artificial terms invented in the 15th c. as distinctive collectives referring to particular animals or classes of persons; but unlike most of the others, it seems to have been actually adopted in use.” The etymology is uncertain; it may be an onomatopoetic formation from gag-gag (imitative of the cry of the goose), or – as Collins Dictionary has it – it may come from Middle English gagelen, to cackle (which is also imitative).

A group of geese can be called a gaggle only when it’s not aloft; a group of flying geese are a skein. (A press gaggle may be held on an airplane, but it can also be held on terra firma.) A group of goslings attended by a few adult geese is a crèche, from the French word for cradle. I learned from a YouTube video that a gaggle is “greater than or equal to five geese” and “is also equal to eight fifty-pound bags of salt.”

Although gaggle has been used, insultingly, to describe a group of women almost since it entered English, it wasn’t applied generally to “a group of people or things” only since the 1940s. Its earliest usages referenced airplanes, appropriately enough. (Citation from the OED, dated 1946: “We started off first in squadrons, then in wings and finally in a sort of formation known as a group gaggle, meaning a flock of geese.”)

There’s also a verb to gaggle, whose dictionary definition is “to cackle like a goose.” But it’s also being seen in the press gaggle sense.

Update on Tillerson media access: He plans to gaggle with reporters tomorrow morning aboard Air Force One en route to Israel https://t.co/zSpT612kQP

Chris Christie, the governor of New Jersey, used the verb to gaggle in this sense in February 2016, when he was a candidate for the Republican presidential nomination. Unlike his opponent, Sen. Marco Rubio of Florida, Christie was not “the boy in the bubble.” he told reporters: “Let's see if he’ll gaggle with you everyday [sic] like I gaggle with you everyday [sic].”

“The Gaggle” was formerly the name of Newsweek’s politics blog. Wikipedia quotes a defunct link to the blog’s main page that defined gaggle as “a flock of reporters pecking at a politician.”

Gaggle.net “has been providing safe online learning products and solutions to the K-12 market since 1999.”

Founder Jeff Patterson gives this explanation for the name: “Our goal was to give teachers an easy way to watch over their gaggle of students, hence the name Gaggle.”

Other 15th-century collective nouns for animals that proved less successful than gaggle include a “shrewdness” of apes, a “business” of flies, a “tittering” of magpies, and my very favorite, a “kaleidoscope” of butterflies. More names here.

Posted at 06:11 AM in Animals, Media, Politics, Word of the Week | Permalink