I’ll get to the course syllabus in a bit. Right now, though, I want to remind you of a pronunciation rule that I invoked a couple of years ago in a post about Gruberie: In English, when a vowel precedes a single consonant that’s followed by an e, the first vowel is long. Double the consonant and the vowel becomes shortened. Hater / hatter. Diner / dinner. (Also see the very end of this 2011 post for my thoughts about Downy Unstopables.)

Yes, there are exceptions (proper, for example), but the rule is general enough that when we see a coined word, we expect it to follow the pattern. That’s especially true when the root of the coined word is already a familiar English word. In this case: nape, a synonym for the scruff of the neck. 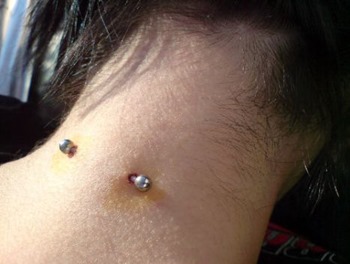 No and no. It is – I quote the website – “group napping classes for exhausted mums and dads to help boost their mental and physical wellbeing.” (Emphasis in the original.) 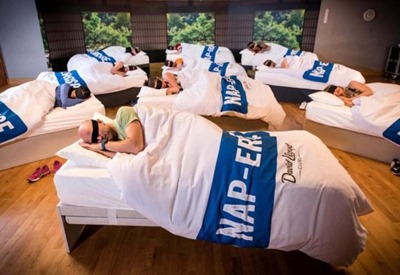 “Group napping” is very high on my list of Unappealing Things I Would Pay to Avoid.

The clubs’ custom duvet covers insert a hyphen in Napercise that clarifies the pronunciation. But that hyphen appears nowhere else, and it just underscores the clunkiness of the name.

“Napercise” is a direct descendant of the original -ercise portmanteau brand, Jazzercise (founded in 1969, and owner of many registered trademarks), which has also inspired  Flexercise, Maxercise, Icercise, and more. David Lloyd Clubs could have spelled its innovation Nappercise and thus cleared up the ambiguous pronunciation, but it didn’t. Or it could have come up with a wholly original name.* Instead, we’re left with “Napercise,” which qualifies as a shitmanteau: a failed portmanteau attempt.

David Lloyd Clubs is launching Napercise in the London suburb of Sidcup, which comedian and late-night host James Corden has called “almost the armpit of England.” The class quickly booked up – there must be a lot of people who are so desperate for shuteye that they’re willing to overlook a terrible name and dubious environs – but here, via Refinery 29, is what you might have enjoyed:

The hourlong session includes 45 minutes of napping and 15 minutes of light stretching — which is definitely one way to refresh and renew. The gyms provide everything necessary, including a bed, blanket, and eye mask. The room will even be set an ideal temperature for slumber, so not even the most minor details got overlooked.

If you just can’t wait, maybe the video will lull you into napency.

* Too bad Napster –  the nickname of the original company’s co-founder, Shawn Fanning – was already taken.

Posted at 06:32 AM in Naming, Portmanteaus, Pronunciation, Spelling | Permalink