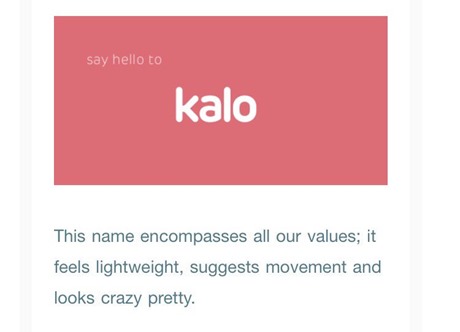 Lystable was founded in late 2014 by Peter Johnston while he was employed as a designer in Google’s London office. (Johnston, who is 28, was just named one of Forbes magazine’s “30 Under 30,” which, confusingly, is a list of 600 “of the brightest young entrepreneurs, innovators and game changers.” The first “30” refers to the number of words in each person’s description.) At Google, Johnston had to keep track of a large number of freelancers who did contract work for the company. “It was essentially a massive list and where the term ‘listable’ was born,” Johnston wrote in “Why We Decided to Change Our Name,” a Medium post he published last month.

This experience at Google inspired me to found a startup that would improve freelancer management. Instead of a patchwork of spreadsheets or a legacy system, I envisioned a sleek, well designed platform that would help teams seamlessly manage their freelancers from start-to-finish in one place. Right away, “Listable” came into my head, but the regular spelling wasn’t available so I swapped the ‘i’ for a ‘y’ and I registered the domain on BigWetFish.co.

This is a name-origin story that I encounter with discouraging frequency. Its arc is: I made a thing, I described the thing, I gave the thing a descriptive name, the pure dot-com domain wasn’t available (or appeared to be too expensive), I futzed with the spelling to make an “available domain.” Mission accomplished, sorta-kinda. Swapping Y for I is a common enough strategy that I created a Pinterest board of examples. In addition to Lystable, that board includes Lyst, an aggregator of fashion e-commerce sites, as well as Lyft, Tylt, Prynt, Pryynt – yep, two Ys – Wyper, and 29 other names, all of them pretty bad. As I’ve said many times before, kree8tive spelling does not give a name legal superpowers.

Lystable was an uninspired choice, created on the fly and over-reliant on two of the deadly D-words: descriptiveness and domain. (I wrote about those D-words here.) But the company and its founder were young, and mistakes were to be expected. Two years later, after some business success – Lystable raised $25 million right off the bat, and opened a San Francisco office in September 2016 – and some shifts in focus, Johnston decided it was time for a change: “’‘Listing’ felt like an ‘us vs. them’ thing — like the freelancers were part of an external directory of talent, which is no longer what we do. It was time for a new brand.”

This is, of course, a hopeless muddle, and useless as a blueprint for creating names. I think it means something like “harnessing the talents of freelancers to turn good ideas into great ones,” but I could be wrong, because it’s so badly conceived and written. (Lazy writing – marked by sloppy syntax and erroneous punctuation – is endemic to Johnston’s Medium post and to the Kalo website generally, but I’ll set that problem aside except to note, as I have countless times in the past, that it’s always a good idea to hire professional writers and editors. And name developers.*)

Johnston gets closer to the task at hand when he says he wanted “our new brand to be associated with collaboration, connectivity, flexibility and fluidity.” Those are decent naming objectives. I am more skeptical about the process that Lystable used to create the new name. It consisted of soliciting responses from freelancers to an online survey (sample questions: “What is your vision for the ‘Future of Work’?” and “Tell us about your ideal world as a freelancer”), picking the most “interesting, surprising, and compelling” ones, and bringing the top three submitters to San Francisco to huddle for one day (!) with the Lystable team and a branding agency. That agency includes naming work in its portfolio, but apparently Lystable thought that wasn’t sufficient – not outside-the-box enough? Not expensive enough? Who knows.

Kalo appears to be an empty-vessel name: a coined word with no inherent meaning. Nothing wrong with that, as long as you’re prepared to fill the vessel with invented or acquired meaning. And that hasn’t happened here: Sadly, a strong brand story was omitted from the deliverables.

Take another look at the company’s name announcement. 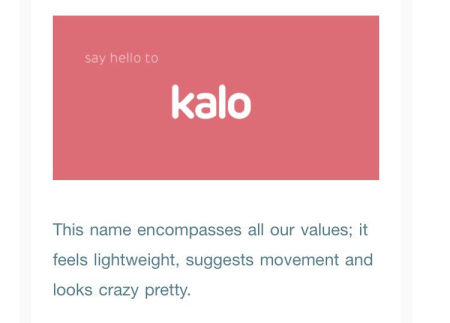 “The name incorporates all our values.” Really?

No part of this rationale supports the desired objectives of connectivity, collaboration, flexibility, and fluidity. Nor does it support the company tagline – “Work without boundaries.”

I hope the association isn’t intentional.

Now, it’s the very rare name that doesn’t have some negative baggage. If you try hard enough, you can find off-color or off-putting associations in almost any name, especially a coined name. But that’s where good storytelling comes in: it can overwhelm the negative association with positive ones.

For example, Kalo might have chosen a a story about etymology. Kalo, they might have said, comes from a Greek root, kallos, that means beauty. The root appears in calligraphy (beautiful writing) and kaleidoscope (beautiful form). (Callow has a different source altogether: Old English calu, which meant bald, as in bald as a newborn.)

Or Kalo might have told us that the name represents the company’s two bases: KA for California (OK, that’s a little fanciful) and LO for London. It might have said that because the word is an invented one, it transcends boundaries and languages.

Any of those stories would have been more satisfying, meaningful, and appropriate than what Kalo is disseminating.

Here’s my free advice: Take some of that $25 million and hire a few people who are skilled at turning vague ideas into powerful, inspiring messages. They’re called writers and editors, and there may even be a few of them in the Lystable/Kalo database.

* You’d think a company whose business is freelancing would understand the value of expert-level contractors, wouldn’t you?

Posted at 07:53 AM in Domains, Names in the News, Naming, Renaming, Story | Permalink

Frieda Kahlo was the first connection that came to mind. But there is no reason why that would be relevant to the company, either.

The first association that came to me was "kaolin," the clay used in "Kaopectate." That may be my scatological mind in action, though.

Dan: It's impossible to prevent people from creating associations with a name based on personal experience, reading, and so on. But it *is* possible for a brand to shape perceptions and create new associations. Creating a name is just the first step; developing and disseminating a strong brand story must follow.

I, like you, Nancy, was appalled that "kalo" aligned its brand values with attributes that no sensible brand would ever want to be associated with. "Lightweight" being the first. I would question freelancers of quality who would want to be associated with a lightweight provider. The next words that jump to mind are fly-by-night and capricious. Neither of which would be compelling to aspiring talent. You make the case admirably and I of course admire the little bit of self-promotion woven into your text.