« New writing for the Visual Thesaurus and Strong Language | Main | To nape, perchance to dream » 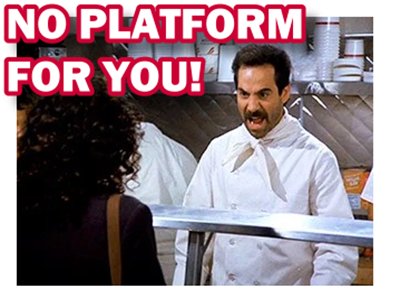 No-platform was coined in the 1980s and codified in the UK National Union of Students (NUS) articles of association. It forbids people who are identified as holding racist or fascist views from speaking at NUS events or standing for election to NUS positions. The list of proscribed individuals and organizations also includes those deemed to be hostile to LGBT concerns. The RationalWiki entry on no platform notes that “the concept has been compared to book burning,” and says, provocatively:

The concept is similar to the political action of cordon sanitaire, where a politician or political party is either unconditionally excluded from coalitions or other forms or cooperation, or even completely ignored. … No-platforming is, at best, an attempt to prevent a balance fallacy, with protesters refusing to allow tacit endorsement of reactionary views.

There’s no U.S. student union comparable to the NUS, but no-platform has nevertheless migrated successfully across the Atlantic – quite recently, from all appearances – where it’s proved to be a handy label for recent college events involving speakers with inflammatory messages, including Milo Yiannopoulos and Ann Coulter. I found citations for no-platform or no-platforming in U.S. publications representing much of the political spectrum. Most of the articles were published in April of this year.

The debate over no-platforming is often divorced from the reality of how it plays out on campus. https://t.co/cRvAMZJiNy pic.twitter.com/5C9iXYiPn9

As graduation season approaches, colleges across the country are locking down commencement speakers to address the class of 2017. Harvard got Mark Zuckerberg (a Harvard dropout). Hillary Clinton is speaking at Wellesley, Bernie Sanders at Brooklyn College. Joe Biden will speak to my seniors at Colby. But if this year is anything like last, other invitees will prove more controversial, sparking another round of debates over “no-platforming”: the practice of opposing campus speakers.

Understanding this sequence of events is crucial, because no-platforming is as much a function of process as of politics. Instead of community-wide discussion and debate over the merits of bringing a given speaker to campus, the debate happens after the invitation, giving the misleading impression that no-platforming is about shutting down speech. Indeed, when savvier campus groups deliberately choose controversial speakers, they’ve already won half the battle by getting the speaker approved.

Kevin Drum responded to Hanlon’s article in Mother Jones, calling Hanlon’s argument “sophistry” and decrying the “affirmative arguments that that there was absolutely nothing wrong with "no-platforming" these folks.” In the right-wing Washington Examiner, op-ed contributor Emily Jashinsky also cited Hanlon, and pointed to liberal “bias in the classroom” as the reason for the conservative backlash. Jesse Singal wrote in New York magazine that the tactic was largely futile, since “no individually successful act of no-platforming can prevent Yiannopoulos from saying whatever he wants online to a very large audience.” And in the Minding the Campus blog, Walter Olsen, a libertarian, referred to a “mob” (note: loaded word) of students seeking to no-platform Heather Mac Donald, a conservative author, at Claremont McKenna College. “By now it is accepted that the goal of no-platforming is to stop hated figures from speaking not just on campus but to audiences more broadly — before public assemblies, on broadcast media, you name it,” Olsen wrote.

And it’s not only conservatives who piously deplore no-platforming in the name of free speech. Some liberals see it as futile or worse.

Quick note about "No Platforming": Actually doing it is impossible these days. Any mole you whack will find a place to pop up again.

@yashar "No platforming" is inherently illiberal. I predict the right will be only too happy to accept the left's precedent. So knock it off!

Posted at 06:20 AM in British, Education, Politics, Speeches, Word of the Week | Permalink