Just last week, the departure of Fox News personality Bill O’Reilly, who had been accused of sexual harassment by many female colleagues, was summarized by the New York Times this way:l

The abrupt and once-unthinkable defenestration of Mr. O’Reilly on Wednesday leaves Fox News without the top-rated host in cable news — and with a potentially far-reaching shake-up in the channel’s vaunted evening lineup.

It wasn’t only the Times: “defenestration” was also employed in connection with “O’Reilly” in stories on the right, the far right, and the left.

Sadly, the age of literal defenestrations is not behind us. As Michael Weiss wrote last month in the Daily Beast, “Two common causes of death for contemporary Russians are heart attacks and falling to one’s end from great heights.” The most recent example of the latter: Nikolai Gorokhov, a lawyer who’d been scheduled to testify in a racketeering case that was a source of potential embarrassment for the Russian president, Vladimir Putin. Gorokhov somehow survived the fall from his fourth-floor Moscow apartment, which occurred a day before his scheduled testimony.

On a lighter note, “Defenestration” was the name of a site-specific art installation in San Francisco; it was displayed on the exterior walls of an abandoned hotel that was held vacant by a land speculator for 26 years. On his website, artist Brian Goggin described the project:

This multi-disciplinary sculptural mural involves seemingly animated furniture; tables, chairs, lamps, grandfather clocks, a refrigerator, and couches, their bodies bent like centipedes, fastened to the walls and window-sills, their insect-like legs seeming to grasp the surfaces. Against society’s expectations, these everyday objects flood out of windows like escapees, out onto available ledges, up and down the walls, onto the fire escapes and off the roof. “DEFENESTRATION” was created by Brian Goggin with the help of over 100 volunteers.

When the installation was disassembled in 2014, Goggin offered all the furniture for sale. The building was razed in 2015 to make way for apartments for low-income and developmentally disabled tenants. The new residents began moving in earlier this month. 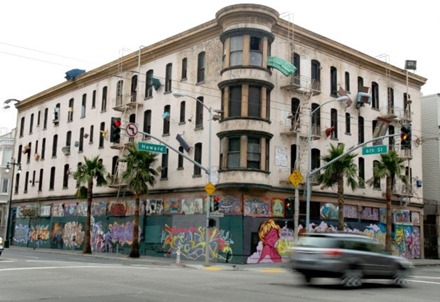 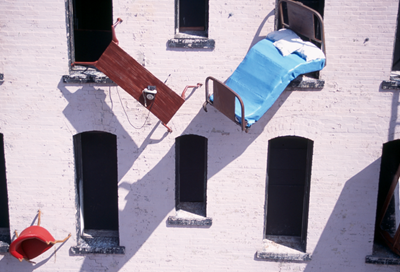 Fenestra, the Latin root of defenestration, survives in fenster, the German word for “window.” And yes, in case you were wondering: there is also fenestration. It’s a word used mostly by architects and architecture critics to describe what mere mortals call “windows.” The late New York Times language columnist William Safire wrote in 2002:

The architectural critic of The Pittsburgh Post-Gazette, Patricia (Pittsburgh Phil) Lowry, wrote in October of a new hospital: “the architects subtly varied the fenestration patterns, establishing individual identities for the two pavilions.” In Canada, The Edmonton Journal hailed a Quebec architect for placing a new home's kitchen, bathrooms and utilities all against the north wall: “preventing the fenestration of that wall reduced energy losses.”

This offers the lexicographer a fenestration of opportunity: let us examine the high-rising jargon that architects and designers call, self-mockingly, talkitecture or archispeak.

Posted at 06:15 AM in Architecture, Art, Current Affairs, Media, San Francisco, Word of the Week | Permalink

And Italian mammas say to their children, "O mangi la minestra o salti la finestra," which means "Either eat your soup or jump out the window!"

Silly me. I live in the world of architecture and design, and since "fenestration" refers to windows, I always think of "defenestration" as removal of windows.

I checked Wordnik.com, and that definition was not cited; however, there's another one relating to removal —
"The act of removing the Microsoft Windows operating system from a computer in order to install an alternative one."